WE RECOMMEND THAT IF ALREADY HAVE FLIGHT TICKETS TO PERU:

Peru is a varied and diverse country due to the climatic, natural and cultural diversity of its regions. It is 1,554 miles (2,500 km) long, and has 3 natural regions: Coast, Mountains (sierra) and Jungle.

There are few countries on Earth that can match Peru in offering such a varied and harmonious linguistic, ethnic, and cultural background as well as one of the most diverse and complex geographies on Earth.
All these characteristics gave birth to some of the world’s greatest ancient civilizations. They are what make Peru a fascinating country for visitors from all walks of life.

At the same time, Peru’s staggering biodiversity is reason enough to charm nature lovers to explore the Peruvian outback. Visitors can spend weeks touring the fascinating coastal desert, the highlands or the tropical rainforest, all of which feature an astonishing diversity of the Peruvian flora and fauna.

Before considering canceling your plans to visit, we would like to suggest that you take a look at some of these attractions. We will take you to the South, then to the North of Lima. After reading this, you will have learned that Peru has much more to offer: 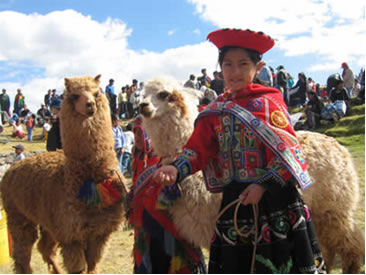 CUSCO – “Ombligo del Mundo” (center of the world) – is a window that we Peruvians invite everyone to come to so they can see one of the most beloved and admired faces of our Peru.

The city of Cusco, the ancient capital of the Incan Empire, was placed on the World Cultural Heritage List by UNESCO in 1983, and is without a doubt one of the most important destinations in Peru. There are Incan buildings waiting for you to discover them among its cobble-stoned streets, ones like the Koricancha and the palace of Inca Roca as well as Andean Baroque structures from the Colonial Period like the Cathedral and the Church of the Company of Christ. In addition, you can visit the picturesque neighborhood of San Blas where the best artisans in the department have set up their workshops. This magical city also has an exciting nightlife with cafes, restaurants, and bars for all tastes. Just ten minutes away from the city, there are the massive walls of the Sacsayhuamán fortress, and a few kilometers from there, you find the archeological sites of Qenko, Pukapukara, and Tambomachay, Incan buildings constructed completely with stone.

There are also the towns of Písac, Maras, Chinchero, and Ollantaytambo, which are spread throughout the Sacred Valley of the Incas, one hour from Cusco. From there, it is possible to catch the train to Machu Picchu. Another way of getting to the citadel is by following one of the Inca Trails, a spectacular network of pathways that snake their way among the snow covered mountains, rivers, and overwhelming countryside. This is one of the best trekking routes in the world, since scattered throughout it, you find remarkable archeological sites and areas rich in unique plant and animal species.

CHOQUEQUIRAO (Southern Quechua: Chuqi K’iraw, Cradle of Gold) is a partly excavated ruined city of the Inca in the south of Peru. It bears a striking similarity in structure and architecture to Machu Picchu and is referred to as its ‘sister’. Choquequirao receives far fewer tourists than its sister but the ruin is no less delightful and is a good alternative to the sometimes overcrowded Machu Picchu. Unlike Machupicchu,

Choquequirao cannot be reached by train or bus. The only way to visit the site is to go on a scenic 2-day hike from outside Cusco.

The ruins at Choquequirao are composed of buildings and terraces at different levels from the lower level Sunch’u Pata to the truncated hill top. The hill top has been leveled and ringed with stones to form a platform of 30×50 meters wide. 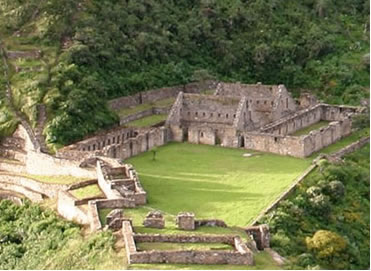 PUNO is a city in southeastern Peru, located on the shore of Lake Titicaca, the world’s highest navigable lake, at 3,860 m (12,421 ft) above sea level and the largest city of the Puno Region and the Puno Province.

The lake contains numerous islands whose inhabitants continue to live as their ancestors have in custom and tradition. The Uros an example of this; this people group lives on “floating islands” that they have artificially made entirely of totora reeds, and they navigate in their traditional boats also made out of totora reeds. Taquile, Suasi, and Amantaní are knows for their kindness of their residents, their ancestral skill in weaving, their pre-Columbian constructions, and lovely countryside. The Titicaca National Reserve (36,180 hectares) protects extensive stretches of totora reeds and various species of plants and animals. 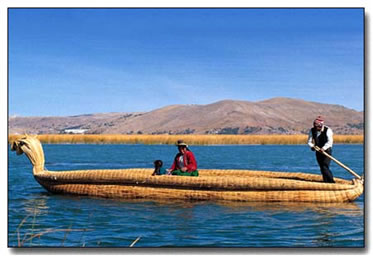 AREQUIPA, known as the White City for its beautiful white walls of sillar, a volcanic stone, and lies at the feet of the mighty volcanoes of Mount Chachani, Mount Misti, and the snow covered peak of Mount Pichu Pichu. The downtown of the city, placed on the World Cultural Heritage list by UNESCO, features Mixed Baroque churches and mansions from the Colonial Period like the Monastery of Santa Catalina, a Spanish city in miniature with stone streets, beautiful patios, and plazas. Sabandía, Tiabaya, and Tingo, located among the large fields, are must see places, and the irresistible Arequipa cuisine is the perfect complement to the visit.

Just 3 hours and 45 minutes from the capital is the Colca River valley and canyon, one of the most extraordinary destinations in the country. Throughout the region, you can see colorful pre-Incan agricultural terraces still used today for growing quinoa, corn, barley, and wheat. During the pre-Hispanic era, the department was inhabited by the Collaguas and the Cabanas; today, the inhabitants have learned to conserve their Colonial churches in Yanque, Lari, and Madrigal, and they continue to wear their traditional clothing. 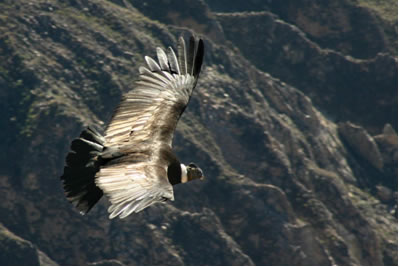 ICA an esoteric land, one of profound religious faith, sand dunes, valleys, and sun, is an agricultural zone where you see interspersed among the extensive desert area fields of cotton, butter beans, asparagus, citrus tree orchards, as well as vineyards. Some of the most important civilizations of ancient Peru established themselves here like the Paracas and the Nasca who left a legacy that has endured the passage of time and the violence of the sand and wind. 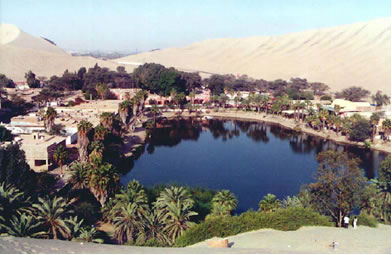 The Paracas National Reserve is a must stop; this State protected natural area is, among its beaches and staggeringly beautiful rock formations, the refuge to fur seals, otters, penguins, dolphins, and more than two hundred species of birds such as flamingos, waders, and guano birds. In the province of Nasca, a little more than one hundred kilometers from Ica, there are the Nasca Lines, one of the greatest archeological mysteries of the world. UNESCO placed this site on the World Cultural Heritage List in 1994. Formed by a series of lines and gigantic drawings traced upon the sands, the Nasca lines feature figures like a spider, a hummingbird, a monkey, etc. that can only be truly appreciated from flying above them.

You can also visit the vineyards of the department, where they produce excellent piscos and wines, the Huacachina Lake, a beautiful oasis situated among the sand dunes just a few minutes away from Ica, and Chincha, the valley which gave birth to the Afro-Peruvian music.

Ballestas Islands, where seals, sea lions, and countless bird species can be viewed in their natural habitat. 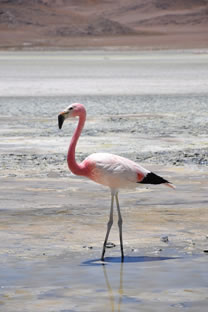