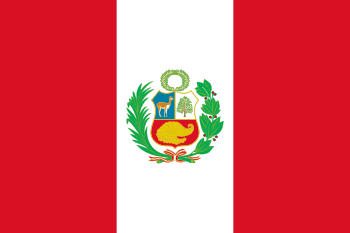 SURFACE AREA:
With an area of 1,285,216 square km, Peru is the third-largest country in South America after Brazil and Argentina, ranking it amongst the world’s 20 largest nations. Peru also holds sway over the sea up to 200 miles from the Peruvian coast and has territorial rights to an area of 60 million hectares in the Antarctic.

Ethnicity/race:
Amerindian 45%, mestizo 37%, white 15%, black, Japanese, Chinese, and other 3%
Peru is a nation of mixed ethnic origins. Throughout its history, Peru has been the meeting ground for different nations and cultures. The indigenous population was joined 500 years ago by the Spaniards. As a result of this encounter, and later enriched by the migration of African blacks, Asians and Europeans, Peruvian man emerged as the representative of a nation whose rich ethnic mix is one of its leading characteristics.

REGIONS:
Peru is divided into 25 regions and the province of Lima. Each region has an elected government composed of a president and council that serve four-year terms. These governments plan regional development, execute public investment projects, promote economic activities, and manage public property. The province of Lima is administered by a city council. 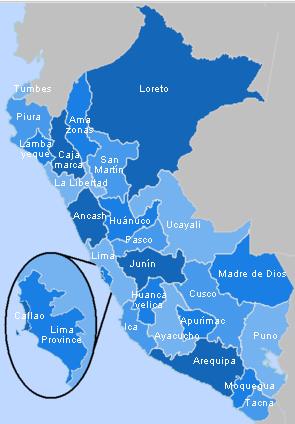 LANGUAGE:
Official languages:
Spanish: 80.3%
Quechua: 16.2%
Other languages: 3.0%
Foreign languages: 0.2% As part of its rich cultural tradition, Peru features many different languages. Although Spanish is commonly spoken across the country, Quechua is a major legacy of the Inca empire, and is still spoken with regional dialects in many parts of Peru. In addition, other languages are spoken such as Aymara (in Puno) and a startling variety of dialects in the Amazon jungle, which are divided up into 15 linguistic families and 38 different languages.

TIME ZONE: The time in Peru is five hours behind Greenwich Mean Time

GEOGRAPHY
The Republic of Peru limits the north with Colombia and Ecuador on the east by Brazil, on the southeast by Bolivia and Chile to the south and west by the Pacific Ocean.
The country has three natural regions: the coast, the mountains – or Andean region, and the jungle – or Amazon.

COAST
200 miles offshore is a narrow strip which varies in width between 30 and 150 km including the territorial sea, islands, sandy deserts and valleys of the Coast culture. It has a very arid climate with temperatures between 15 and 20 degrees.
The coast is divided into three sectors: North, Central and South, with the Northern Tropical Semi-type (Tumbes, Piura), and from Lambayeque to Tacna: Sub-Tropical. Both representing 12% of the surface

HIGHLANDS
Planning Area is considered that is above 800 and 1000 m and is characterized by a morphology heavily eroded, with canyons, plateaus of different altitudes, in the Sierra the temperature decreases with altitude and has large amplitudes daily rainfall is low and steppe vegetation are the main cities: Cusco, Puno, Huancavelica, Cajamarca, Apurimac and Junin, which represents 20% of the area.

JUNGLE
From the point of view there are two areas Morphological (High and Low). Upper part Pongos excel, consisting of waters that descend from the Andes, The Highlands have the best soils and are formed by Terrazos. In the jungle the climate is hot and humid. Its main cities are: Ucayali, Loreto, Madre de Dios, Tarapoto representing 60% of the area.

CLIMATE
Peru’s geography naturally leads to a varied climate. Much of the western coastal plain consists of dry deserts, while the Andean highlands range from temperate to frigid. The jungle regions of the east are tropical and humid, with distinct rainy seasons.
In the Coast, the weather varies, with a damp and cloudy winter that runs from June to September. Average temperatures come in at 14°C. During the summer, temperatures can peak at 28°C or over.
In the Highlands, the sun shines all year round during the morning, but temperatures descend at night, averaging 5°C.
The climate in the Amazon jungle is tropical all year round. In both regions, the rain season runs from December through April.
Lima is a city that features a moderate climate, ranging from a light drizzle in winter to a warm summer.Average temperature in summertime -from mid-December to mid-March is 25 / 28°C. Winter, which usually features overcast skies and high humidity, has temperatures ranging from 10 to 16°C.
Highest Point: Nevado Huascaran (22,205 feet), located in the Cordillera Blanca range of the Andes (read more about the highest mountains in Peru)
Major Mountain Ranges: Andes
Major Rivers: Amazon, Ucayali, Madre de Dios, Marañón.
****

The president is chose for five years (not eligible for consecutive reelection) The republic Congress is unicameral with 120 seats, the members are elected by popular vote  for five years, the Supreme Court or Supreme Court, 8 judges are nominated by the National Council of the Judiciary). The Head of State and Government Ollanta Humala Tasso (president since 2011)

The Inca Empire and Spanish Conquest
When the Spanish landed in 1531, Peru’s territory was the nucleus of the highly developed Inca civilization. Centered at Cuzco, the Incan Empire extended over a vast region from northern Ecuador to central Chile. In search of Inca wealth, the Spanish conqueror Francisco Pizarro, who arrived in the territory after the Incas had fought a debilitating civil war, conquered the weakened people. The Spanish captured the Incan capital at Cuzco by 1533, and consolidated their control by 1542. Gold and silver from the Andes enriched the conquerors, and Peru became the principal source of Spanish wealth and power in South America.
Pizarro founded Lima in 1535. The viceroyalty established at Lima in 1542 initially had jurisdiction over all of the Spanish colonies in South America. By the time of the wars of independence (1820-24), Lima had become one of the most distinguished and aristocratic colonial capitals and the chief Spanish stronghold in the Americas (along with Mexico City).

Independence
Jose de San Martin of Argentina and Simon Bolivar of Venezuela led Peru’s independence struggle. San Martin proclaimed Peruvian independence from Spain on July 28, 1821. Emancipation was completed in December 1824, when Venezuelan Marshall Antonio Jose de Sucre defeated a Spanish army at Ayacucho, ending Spain’s rule in South America. Spain subsequently made futile attempts to regain its former colonies, but in 1879 it finally recognized Peru’s independence.
After independence, Peru and its neighbors engaged in intermittent territorial disputes. Chile’s victory over Peru and Bolivia in the War of the Pacific (1879-83) resulted in a territorial settlement in which Peru ceded the department of Tarapaca and the provinces of Tacna and Arica to Chile. In 1929, Chile returned Tacna to Peru. Following a clash between Peru and Ecuador in 1941, the Rio Protocol–of which the United States is one of four guarantors (along with Argentina, Brazil, and Chile)–sought to establish the boundary between the two countries. Continuing boundary disagreements led to brief armed conflicts in early 1981 and early 1995, but in 1998 the governments of Peru and Ecuador signed an historic peace treaty and demarcated the border. In late 1999, the governments of Peru and Chile likewise implemented the last outstanding article of their 1929 border agreement. Peru and Chile still dispute the maritime boundary.

RELIGION
Roman Catholic: 89%
Evangelical: 7%
other religions: 4% Peru is a naturally religious country: a diversity of beliefs and freedom of worship can be seen from the wide range of festivals and rituals that feature both Catholic fervor and the mysticism of age-old pre-Hispanic cultures.

DANCES
The Dances of Peru are the dances whose origin or transformation occurred in the Peruvian territory with elements of dance and instruments mainly from the merger of the American Indian cultures, African and Hispanic.

MUSIC
The Spanish brought the Indian world the mandolin and guitar. The Indian quickly mastered the mandolin and his eagerness to adapt this instrument and the guitar to the interpretation of the music itself wayno, k’aswa, araskaska, harawi …-creates the charango and kirkincho, the image of the mandolin and guitar. The harp and the violin were conquered by the Indian as Io received from the invaders. Now the harp, violin, mandolin, charango the kirkincho and are, with the flute, the pinkuyllo, the antara and tinya, Indian instruments. Soul and holiday cheer. Or when the penalty goes to the houses and villages, the charango and the cry for the Indian kirkincho with such force and with the same desperation that the flute and the pinkuyllo.

GASTRONOMY
Peruvian cuisine is considered one of the most varied and richest in the world. Thanks to inheritance pre Inca Inca and Spanish immigrants, African, Sino-Cantonese, Japanese and Italian mainly to the nineteenth century, together, mixing and acriolla a cuisine and exquisite flavors of four continents, providing a unique and impressive variety of dishes typical Peruvian cuisine is constantly changing, impossible to enumerate in full. Suffice it to say that only in the Peruvian coast, there are over two thousand different soups.
It is common knowledge around the world that Peruvian cuisine has already found a place within the world’s most recognized. It has recently been published in English on the Epicurious website, an important article on the benefits and importance of our kitchen. We reproduce part of the publication: “As they say, everything old has become new. And in the case of Peru, when we say “old” we mean old. One example of how our chefs are looking to the Andean roots, is the novel use which gives quinoa, a grain that dates back to the Incas, with a slight nutty flavor and 3000 years old, aptly named “Wonderful food,” low in carbohydrates and high in protein.
Any person who makes tourism in Peru, it is immediately captured by the rich local cuisine, and if you are a gourmet, always looks for an excuse to go back and enjoy a new taste.
The Peruvian cuisine is a fusion of the way the Spanish cook with that of the native Peruvians. Commodities such as potatoes, corn, peanuts, peppers, and seafood from our sea, dating back to the Inca Empire, which flourished in the Andes for thousands of years. When the Spanish conquistadors arrived in the 16th century, brought with them European style desserts and other ingredients such as chicken, beef and citrus fruits. Later immigrants arrived Africans, Italians, Chinese and Japanese that helped create a tasty meal that is eaten so far in homes and Peruvian restaurants.

Ceviche: Combination of seafood marinated in lemon juice.
Tacu Tacu: Mix beans and rice usually served with a steak.
Lomo Saltado: Cuts of meat that is fried with onion and tomato.
Pescado a lo Macho: Baked fish fillet drizzled with tomato sauce.
Aguadito de Mariscos: Combination seafood with green sauce.
Jalea Mixta: The seafood of your choice breaded and deep-fried.
At the following links you will find more information about other destinations.