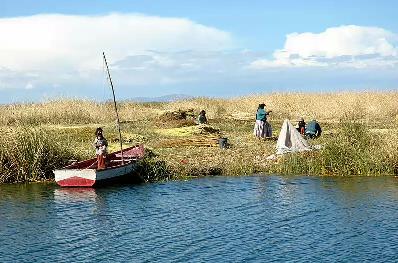 Located in southeastern of Peru, the capital has the same name, Puno, is in the highlands between 3.812 and 5.500 meters above sea level. It is one of the highest cities in Peru and the fifth in the world. Currently has an area of 1566.64 ha, which represents 0.24% of the territory of the province of Puno. This department has the world’s highest lake, Lake Titicaca; it contains the Uros, Taquile, Suasi and Amantani islands, whose inhabitants have preserved ancient customs and traditions. It has geographical units such as the Andes and consists of the highlands, hills and mountains. It Borders on the east with Bolivia, on the southwest with Tacna, Moquegua and Arequipa departments, to the west with Cuzco and to the north with Madre de Dios.

Through the years Puno has evolved gradually from village to city, this process has been slow and demanded many activities and important events that placed the city in what is today an important center of administrative activities, economic flows and services.

Ancient Times
10,000 years B.C. nomadic hunters and gatherers roamed the plateau in looking for food.It was found tombs and caves with human remains, ceramics and textiles belonging to human groups of Pucara and Tiahuanaco culture. Pucara was the oldest urban center in the area, with monumental architecture and valuable sculpture and ceramics. There ended the whole previous stage of domestication of plants and high Andean animals and then the civilization of Tiahuanaco was developed. From that time began the construction of large buildings in the form of elongated truncated pyramids, which became characteristic of Pucara. When Tiahuanaco dissolved between the XII and XIII centuries, several kingdoms were formed independently such as the Kollas, centered on Atuncolla and Sillustani; Lupacas with Juli and Chucuito center, with settlements like Cochacacha; and Pacajes around the Desaguadero.
Colonial Period
Puno begins to appear as a town since 1575, assuming economic functions, trade relations, settlement of miners, migration, making Puno an important point. In the XVII century assumed a new role, being a crossing point between Arequipa, Cusco, La Paz and Potosi.
In 1567, it was discovered the silver mines of Laikakota, and began to organize a population of miners and in which space is configured San Luis de Alba, 5km from the city of Puno, which became the most important settlement before 1668 . Puno was founded that year by the viceroy Pedro Antonio Fernández de Castro in the space that now houses the historic city center.
In 1734 the bay of Lake Titicaca starts to take importance when was originated a craft port in what is today the city dock, so Puno grows towards the south and north sides. When the new Viceroyalty of Río de la Plata in 1776 was created, segregated from the Viceroyalty of Peru, the territory of became part of it, from 1784 until 1796, when Puno returned to Peru after twenty years.
Republican Era
On the outskirts of Puno were developing activities such as agriculture and cattle farming in smaller numbers. In 1835 starts the export of wool to England being one of the most important activities for several years. On 29 August 1856 it was established the University of San Carlos de Puno with the faculties of theology, jurisprudence, medicine, philosophy and literature and science. In 1871 the Yapura and Yavari boats arrive in Puno and begin the build of the port of Puno, urban activities take a turn toward the lake supported by the construction of the railway which starts operating in 1874, these two urban facilities makes Puno be consolidated to the east of the city in the coming years. In 1875, Puno was a growing towards the south of the city and the lake. In 1900, urban growth was setting over the bay of Puno.
Contemporary Puno
In 1940, the commercial and artisanal activities in Puno were reaffirmed, becoming an urban center. In 1943 there was a great drought, the largest in history, which affected the migration to the city during the next few years.
In the decade of 60, already have works and major projects like the Municipal Theatre, Coliseum closed, paved avenues. In the 80’s there is significant migration from rural to urban product of socio-political violence. In the 90’s, migration pressure decreases, but the city continues to grow horizontally, developments sits on the outskirts of the city. Tourism begins to grow intensively, appears in the city a high tendency for hotels construction. From 2000 it was continuing the paving of streets, balconies are built in the hills surrounding the city, bay project is started, also called eco-tourism pier
Weather

The city of Puno is located on the shores of Lake Titicaca, and the weather is cold and semi-dry. The rainy season begins in October and ends in April. The average annual maximum temperature is 14 º C (58 º F) and the lowest is 3 ° C (37 º F).
Getting to Puno

Main Touristic Attractions
The main square is one of its principal attractions, it has suffered many changes, and it has a monument of Arica’s hero, Francisco Bolognesi. Also around it and outskirts are many places to visit.
* Cathedral of Puno
* San Juan Church
* Balcony of Conde de Lemos
* Lake Titicaca
* Uros and Taquile islands
* Amantani Island
* Sillustani Island
* Lake Titicaca Ruins
Tours to Titicaca

Puno is the third city that receives the greatest flow of foreign tourists after Cusco and Lima. Puno has many natural attractions such as Lake Titicaca which is the highest navigable lake in the world, located at an altitude of 3810 meters. The lake collects a total of 36 islands, being the largest the ones which are in Peruvian territory: Uros, islands made by Totora, Taquile, the second largest island in the lake and Amantani, north of the island of Taquile, is the largest island on the Peruvian side of the lake. About archaeological attractions you can visit Sillustani, located 34 km from the city of Puno.
* Sillustani Chullpas half day tour
* Sun Island Overnight excursion

– The best option is booking a car or taxi from the airport to Puno in advance, as the airport in Juliaca is approximately 1 hour from Puno. You can ask your hotel or agency for a transfer.
– Schedule your tour to Lake Titicaca in the early morning because the boats do not travel through the Lake after 16:00 and for security it would be better if you book your tour with a day in advance.
– Bring sweaters, sunglasses, gloves, hats, and sunbluck.
– Take care of nature and monuments you visit. Always carries a bag to put the garbage, do not bring artifacts that may alter the environment.
Health

– It is recommended to stay at least 1 or 2 days to acclimatize.
– Avoid heavy meals and drink plenty of water, coca tea, muna tea.
– Try not to drink coca tea by night because it has similar effect to caffeine.
Security and Safety

– Avoid hiring services from people who are walking around air and land terminals.
– When you are traveling by bus, keep your valuables belongings with you, use a hand luggage.
– If you want to change money go to banks or exchange offices.
Puno calls

It is not difficult to make currency exchanges; there are many banks with international networks and also exchange houses.
Culture and Entertainment

Fiesta de la Candelaria. The greatest feast day of Peru, celebrated each year of February in honor of the Virgen de la Candelaria, patron of Puno. The celebration of the Virgin is associated with the celebration to the Pachamama or Mother Earth. The festival takes place during the first two weeks of February, dancers and musicians from all the department give joy to the streets of Puno. This show could be considered as a unique manifestation of the cultural wealth of the South American Andes. On September 2nd, 2003, the Feast of the Virgen de la Candelaria in Puno was declared Cultural Heritage of the Nation; it represents an expression of traditional manifestations of culture of communities located in the southern highlands of Peru, and contributes to regional and national identity.
Carnival, late February to early March. Participants play with water balloons and dance traditional dances. Musicians and dancers walk through the streets in colorful costumes.
Puno Week, takes place on the first week of November. It celebrates Manco Capac legend, founder of the Inca Empire, with a procession starting from the shores of Lake Titicaca to the village. There are also dances and music, including the celebrations of the “Day of the Dead.”
Immaculate Conception, Celebrated on December 9 in the town of Lampa. It is a ritual full of authentic folk dances of the plateau. Lampa is 1 hour from Puno.
Miniatures Festival. Celebrated the first week of May of each year. May 3 is the opening day, which is displayed miniatures of everything, from houses, cars, to cases of beer and more. The ritual is to acquire all these models and to bless them with the image of the Virgenb de la Gruta.
Folklore

Its cooking has simple procedures, varied and full of flavor, products such as, chuno (dehydrated potato), quinoa, corn and meat, are the bases of Puno’s cooking. The most representative dishes are Cancacho, Pesque de quinua, Chairo

Puno has a large number of restaurants which offers different types of food. Here you can check the list that we have of the principal restaurants where you can enjoy Peruvian and International food. More information>>>
Nightlife

Jiron Lima is a free street with many restaurants and pubs. This street is the center of nightlife and is visited by many tourists and locals who go looking for distraction. Peñas with live music create a pleasant atmosphere.