The Sillustani Island is about of 34 km from Puno, on the shores of Lake Umayosea, is a pre-Inca cemetery where you can see a series of impressive tombs belonging to the Kolla culture that developed in the northern part of the lagoon, in Hatuncolla locally. The archaeological site is known for its giant “chullpas”, tombs which have a particular form, as inverted truncated cones. Some of these buildings reach up to 12.5 meters.
Before being placed in the chulpa, the body was mummified in a fetal position. Along with the mummy were placed his belongings in some cases gold and silver objects, ceramics and food utensils, since beliefs say that after the death resurrected elsewhere where they will eat and drink, as before die. 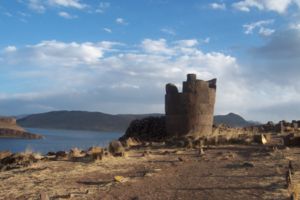