The Lake Titicaca is located on the plateau of Collao, at an altitude of 3812 meters between the territories of Bolivia and Peru. It has an area of 8,562 km ² of which 56%, 4,772 km ², corresponding to Peru and 44%, 3,790 km ² to Bolivia. Its maximum depth is estimated at 281 meters and its level is irregular and increases during the austral summer.

It is the highest navigable lake in the world and is ranked 19 th in the world by superficie. The annual temperature average of the lake is 13 ° C, the climate in the lake region has large temperature variations. Precipitation increases in the months of summer, December to March and falls in winter months, April to November. In summer there are frequent storms on the lake and the surrounding area and flood in parts of level 0 of the lake.
The fauna is composed mainly of ducks, grebes, chulumpi tiki guallatas and parihuanas. Among the fish are the suche, the carachi and trout which were introduced. In the lake there is a giant frog species, the lake is the only habitat of this species. The flora is represented by 12 varieties of aquatic plants including the totora, yana llacho, lenteja de agua and purima. The most popular islands are Amantani, Esteves, Uros and Taquile.
There is a famous legend about Titicaca Lake, it is said that among its depths there was a valley where people of noble hearts used to live in peace and harmony, and they did not know the evil and reined only happiness and love. The gods also felt happy for the good heart that these people had, they only had a condition: is not allowed climbing the mountain tops where the sacred fire burning, for a long time people did not think of violating this order of gods.

Later, the devil or Satan, the prince of darkness condemned to live in the darkness, appears in the valley and led to the temptation to the residents, because he could not stand seeing how these people used to live. The devil had managed to divide men sowing discord, were asked to prove their courage by going to search for the Holy Fire to the top of the mountains. These people to challenge what the devil had told them scaled the mountains which made them fall into sin, where evil was generated. Later sinners realized that they had disobeyed the gods and decided to exterminate them. Thousands of pumas left the cave and devoured these beings who begged the devil to help them from the pumas, but the evil remained unresponsive to their pleas. The god Inti or Viracocha, seeing that the inhabitants had committed his first sin began to cry and his tears flooded in quarantine with deluge the valley to form what is now the famous lake. Only a man and woman came to save on a totora boat, when the sun shone again, the men and women did not believe his eyes, under the blue and pure sky, were in the midst of a vast lake. In the midst of the waters floated the pumas that were drowned and turned into stone statues. Since then Lake Titicaca, according to this legend is known as the pumas of stone. 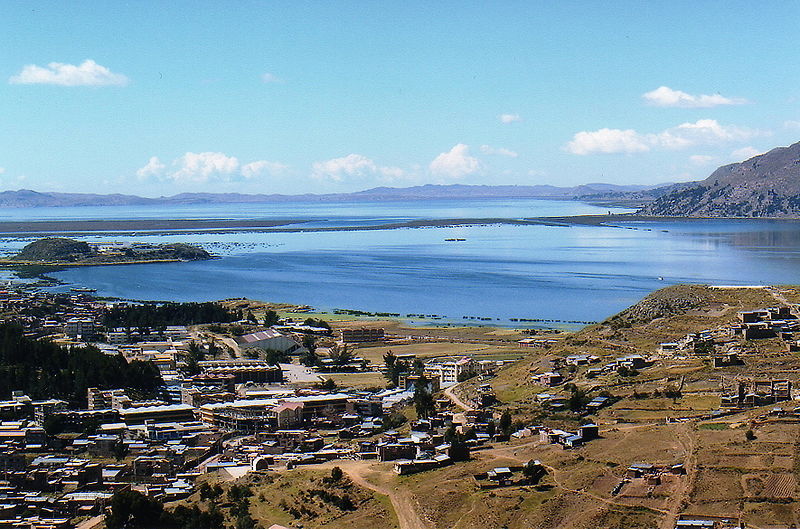