There are many ruins on the Lake Titicaca which are derived from the Inca and Aymara civilizations that inhabited the region thousands of years ago.

Koati is the second largest island of Lake Titicaca sacred; here we find vestiges of Inca culture. In the pre-Columbian past, the Inca Tupac Yupanqui, ordered the construction of an ornate building used to be a “Ajlla Wasi” or House of the Chosen Virgin of the Sun “, which was nominated” lñak Uyu “.
So colossus versus ascending Illampu and three levels of agricultural terraces, ceremonial structure is built on an embankment of 55 m rectangular proportions. Long and 24 m. wide. The building, made by Inca architects unhewn stone, except one room-of the 35 that make up the ground floor, which is lined with carved stones, is drawn as a big C. The entire housing complex had two floors and its front is seen scatter symbols and trapezoidal niches.
The walls were made with large building stone bound with clay, while the ceilings were achieved according to the system of false dome or vault advanced.
A Koati Island is about two hours sailing up from Copacabana in motor boats. However navigation can be shortened by taking the boats at the northern end of the peninsula of Copacabana at the foot of Sampaya. 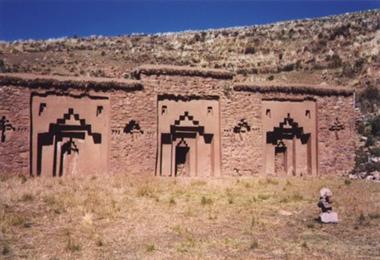 On the Bolivian side of the lake lies the Isla Del Sol, or Island of the Sun. It is said that this is the largest of the islands in Lake Titicaca. Still, it measures only 5.5 miles in length and roughly four miles in width. Regarded as the home of the Inca sun god Inti, as well as the birthplace of Manco Capac, first of the Inca bloodline, the Isla Del Sol features several important ruins and an alluring atmosphere that attracts visitors year-round. Travel to the northern tip of the island, where you’ll find the town of Challapampa and the Chinkana ruins. This site is a labyrinth of stones once used as a holy complex for Inca priests. Roughly 300 feet from the Chinkana maze sits the Sacred Rock, carved in the form of a puma. Nearby, two large footprints are hollowed out on the ground. These footprints were supposedly left when the sun god came to the island and gave birth to Manco Capac. On the south side of the island is Yumani. This is the main town on the island and home to the Inca Steps. A stone staircase with 206 ancient steps leads up a hill to a sacred fountain said to be the fountain of youth.

Los Uros are a series of floating islands. These man-made islands on the Peruvian side of the lake are constructed entirely of reeds from the shore and date back hundreds of years. In effect, the islands themselves are ruins. Tourists take boats out to these floating islands to observe the Uros tribes and their traditional way of life. This has become a more commercial experience in recent times, with many crafts vendors hawking their wares on the main islands. Use care when walking on Los Uros, as the reed construction is thin and fragile in some spots.
Isla de Taquile (Taquile Island)
A lesser-known island in Lake Titicaca is the Isla de Taquile. Located 28 miles offshore from the mainland port of Puno in Peru, Taquile has several Inca and pre-Inca ruins along with some beautiful terracing. The island is long and narrow, with a few small villages where locals sell a wide variety of crafts and hand-woven clothing.

The ruins of an ancient temple have been found by international archaeologists under Lake Titicaca, the world’s highest lake.
There were exists myths about a possible metropolis built around the lake, from 1956, after the first underwater archaeological exploration, it was found remains that suggested the existence of buildings submerged by the waters of Titicaca for reasons that are still unknown.
The Professor Ruben Vela, from Tiahuanaco Archaeological Institute, develops a hypothesis to understand the origin of the relics found: “These ruins are sacred. Their construction suggests a lakeside temple that would have been the meeting place of a religious pilgrimage that was very important. “Other researchers have been complemented this theory by arguing that the submerged ruins are an extension of the walls of the Temple of the sun, which is located in the north of the island and the previously existing Titicaca.
According to research conducted by a group of Argentine divers in 1966, there were walls and enclosures in U shaped with the open end pointing toward the center of the lake. We also found a paved road about 30 meters long in perfect condition, similar to the Inca Trail can be found in different parts of Peru. And there are plenty of versions that refer to a lost city Atlantis or in the depths of Lake Titicaca, and the existence of a group of sacred labyrinths (known as chinkanas) of several kilometers, which once might have served as a connection to Cuzco and Machu Picchu.
While the inhabitants of the Island of the Sun are reluctant to provide information about the ruins, various investigations such as Cousteau and other researchers, in which gold is found, vessels and buildings belonging to archaic periods, have fostered the belief in the existence of a lost city. 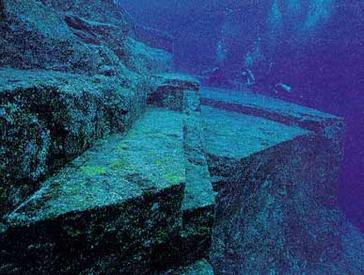