The San Juan Church is located in Pune Park, near the main square. More than 200 years ago was a simple chapel of the natives, built of adobe. Inside the altar is the venerated image of Our Lady of Candelaria, patron of Puno, whose feast is celebrated every February 2nd with native dances, folklor festival costumes and songs.

It was always a place of prayer for suffering people, whether miners exploited, abused indigenous, poor and marginalized people. The Image of the Virgen de la Candelaria is venerated from the year 1580. it is said that Virgen de la Candelaria performed miraculous appearances to protect miners exploited of Lacaycota beside eliminating ants, snakes and toads sent by the devil to destroy the capital of the highlands.
The church has a facade of French Gothic style, with three beautiful Gothic altars and religious paintings inside. 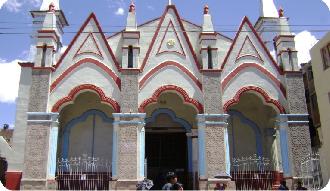