The Cathedral of Puno holds the rank of Minor Basilica, its construction dates from the eighteenth century and was completed on 25 May 175, in the old Supay Kancha. Worked in stone by the Peruvian Simon de Asto, whose name is on the main front. This monument is representation of the mixed style. The physical configuration of the monument in terms of plant and domed is Baroque style, typical of the eighteenth century.

The church’s interior is characterized by its spaciousness and simplicity; it has an altar of marble. Two miraculous images are venerated, they were taken to the highlands in the early years of the colony, Lord of Quinary or “Lord of the Bullet” and the Virgen de los Remedios, they had a silver church in San Luis de Alba.

It is said that Biscayans and Andalusians held a confrontation for the mines in San Luis de Alba and as a result, a bullet embedded itself in the right shoulder of the “Lord of Quinary” which cause him to change his name to “Lord Bullet”. The front of the Cathedral interior is from silver and the side walls are seen paintings of Cusco and Italian schools. In 1930 a fire destroyed the Cathedral and carved figures were lost invaluable, the cathedral was temporarily closed. On May 6, 1964 was opened again, has a burial area, located to the left side of the altar, where are the remains of Illustrious Monsignor Julio Gonzales Ruiz, former Bishop of the Diocese of Puno 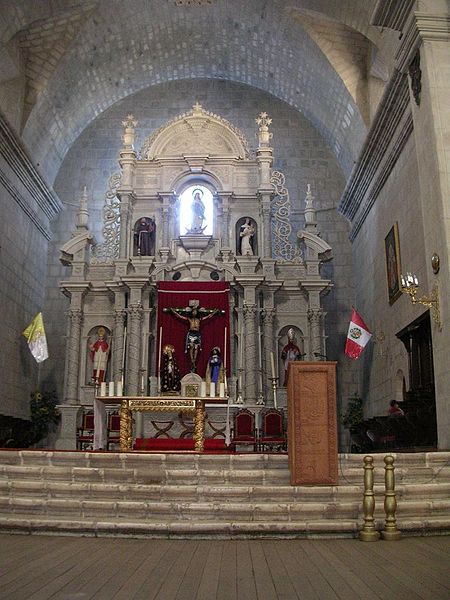