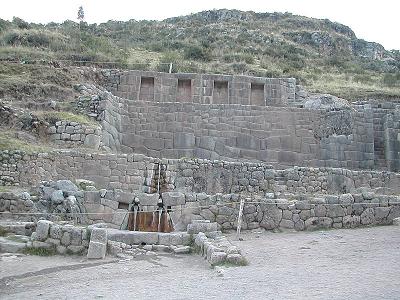 TAMBOMACHAY.-
Located 7km from Cusco at 3,700 meters above sea level, this site was popularly known as the “Inca’s Baths”. Researchers believe Tambomachay was an important center of worship of water. It is an archaeological complex made up of well-crafted canals, walls and windows which show the Incas’ extraordinary architectural talents and their in-depth knowledge of hydraulics.
Tambomachay in spanish or Tampumachay (Quechua: tanpu Mach’ay, resting place) is located on the outskirts of Cusco. It is an archaeological site that was assigned to the worship of water and the head of the Inca Empire could rest. This place is also known as Baños del Inca.
It consists of a series of aqueducts, canals and several waterfalls that run through the rocks. What is surprising is that a main waterfall, the Incas created 2 secondary cascades, which are exactly alike.
Among its most important tourist attractions are the hot springs located 800 m from the village to which medicinal properties are attributed to them and give name to it.