The famous Sun Temple of Qosqo was and is in practice a synthesis of the Inkan organization, architecture and religion; that had already reached the summit of their level by 1438. It possibly represented the “Navel of the World”; therefore, the world’s center in the pre-Hispanic Andean Cosmovision.

According to our history, it was the first Inka, Manko Qhapaq who built the original temple. But, it was the ninth, Pachakuteq who since 1438 reconstructed, enlarged, improved and modernized the most important religious complex of the vast Inkan Society. 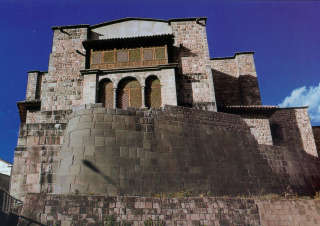 There are certain discrepancies about the complex’s original name, and though they are not antagonistic ones, they cause a relative confusion. Frequently in chronicles and history treatises the name Intiwasi is found, (inti= sun, wasi= house) it means “Sun House”; also the name Intikancha is used and which would mean “Sun Palace” (this is considering that almost all Inkan palaces had the noun “Kancha”). While that its most popular name is Qorikancha that would mean “Golden Palace”. Maria Rostworowski suggests that the ancient temple was known as “Intikancha” and after Pachakuteq as “Qorikancha”.

All the chroniclers coincide manifesting that the quality of the building was extraordinary, made with gray basaltic andesites coming from the quarries of Waqoto and Rumiqolqa. The walls have the “Sedimentary” or “Imperial Inkan” type that is the maximum expression of architecture in pre-Columbian America. The stones are between medium to large which outer surface is rectangular; the structure is straight horizontal that in the most important temples exhibit side views with marked convexity. The joints between stones are polished, so perfectly made that they do not allow insertion of even “razor blade”. The cross section structure is “tied up”, that is, with “H” shaped bronze clamps or clips in the internal joints that fastened together the lithic pieces avoiding harmful horizontal displacements in case of earthquakes. The wall also have a decreasing vertical structure, that is, with bigger stones in the lower part and every time smaller toward the top. The walls are wider in the base than on the top; with the classical inclination inward (there is not a general rule or measurement for that inclination) balanced with the trapezoidal shape of doorways, niches and openings. Those characteristics make the walls support themselves forming a resistant, solid, anti-seismic structure that was able to resist the two huge earthquakes after the Spanish invasion, in 1650 and 1950 that destroyed every tough colonial building. Today in some Inkan walls of the complex there are a few cracks. They are not a result of bad calculation or technique of the Quechua architects, but simply, consequence of changes carried out in colonial times, the earthquakes and mainly exposition to inclement weather and erosion after all of them. According to some studies the finely carved stone walls had a continuation of sun-dried mud-bricks on the top forming very steep gable ends in order to enable drainage of rain waters. The roofing was thatched made in wood and “ichu” the wild Andean bunch grass, with eaves projecting out about 1.6 mts. (5.25 ft); roofs which modest aspect was remedied in festivity days when they were covered with showy multicolored rugs made with special feathers. Gasparini believes that the often mentioned by chroniclers “gold edging” that served as a crown surrounding the whole outer upper side of the temple served, more over, in order to dissemble the difference between the fine stone wall and the upper adobe wall. The floor in the open areas of the temple must have been completely and finely paved with flagstones while the floors inside the enclosures were surely made with kilned clay as a solid ceramic block like the treated floors found in Machupicchu.

The temple’s main gate faced toward the Northeast; almost in the same position of the present-day entrance to the Santo Domingo (St. Dominic) Convent, overlooking the Intipanpa (“Sun Plaza”) that today occupies the small park in front. According to chroniclers this was a religious complex constituted by temples dedicated to different deities. It had a layout very similar to that of a classical “kancha”; with enclosures around a central patio where according to Cieza de Leon, every doorway was veneered with gold plates. 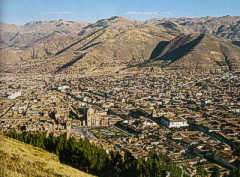 The Sun Temple stood out in the complex, covering the space occupied today by the Santo Domingo Catholic Church. Its eastern end was completely demolished while the western one still subsists partially forming what is known as “solar round building”, that is, the semicircular wall overlooking the present-day Arrayan street and the Avenida el Sol. The Sun Temple had its four walls and even the wooden ceiling completely covered with gold plates and planks, according to Garcilaso’s description it must had a rectangular floor plan, with a very high thatched roof for facilitating ventilation. It is worth pointing out that whom gives the most detailed information about the subject is the famous Cusquenian Chronicler Garcilaso de la Vega, who wrote as it is indicated by himself: “… what I swallowed in the milk and saw and heard from my ancestors…”. On the eastern wall of this temple must have been the facade and Main Altar that as it is known contained the representation of the Sun God in a gold plate with the shape of a “round face and rays and flames”. That solar representation was so huge that it covered all the temple front from wall to wall; in the treasures distribution among the conquerors, that golden piece corresponded by casting of lots to Mancio Sierra de Leguisamo, an inveterate gambler who lost it during one night playing dices; event by which the famous saying ” bet the sun before dawn” was created. Chronicler Sarmiento de Gamboa suggests that Pachakuteq ordered a layout so that the Sun would occupy the main place along with the Wiraqocha god representation on its right side and that of Chuquiylla (it must be “Chuki Illapa” or thunder, lightning and thunderbolt) to its left side. Also, on both sides of the Sun image were the “Mallki” (mummies or embalmed bodies in a fetal position) of the dead Inka Kings, according to their antiquity, and over litters of solid gold.

In the Andean Cosmogony it was considered that the Moon or Mamakilla was the Sun’s wife. Therefore, the Moon Temple was located on the eastern side of the Solar Temple; it had a rectangular floor plan with the best quality of architecture, unfortunately it was almost completely destroyed in order to built the Catholic Church. One of its gates is still seen as well as its eastern wall with the classical trapezoidal niches. Among those niches is the horizontal dark stripe that is believed to be the support zone of the silver plates that covered completely its walls. In the center of the temple there was a silver Moon representation and on both sides of it the embalmed bodies of the dead Qoyas (Queens), according to their antiquity.

More over, in this vast complex there were 5 Water Fountains, in which flowed clean water transported through underground channels; the water springs or sources were kept completely secret. Those water fountains had religious duties as water was another deity in the Andean Religion; they were also adorned with precious metals, had golden spillways, and large gold and silver jars. In colonial times the water was dried up as a consequence of lack of maintenance and on-purpose destruction. Garcilaso indicates that he saw just one of them: the last one that Dominican monks used to irrigate their vegetable garden. Since 1975, the convent and church were reconstructed, at the same time some archaeological digs were performed too; they finally made possible finding one of the 5 original fountains. It is located lower and before the “solar round building”; water still flows through its finely carved channels. It is possible that in the future remains of the other fountains described by Garcilaso will be found. Until 1990 most of the Solar Garden’s space was covered by different buildings; thanks to a law that was put into effect by the end of the 80s, the central government and especially the Qosqo’s Municipality bought the lands and houses of the sector and some archaeological works were carried out. The aim was to uncover our past and make known the so little that is left from the complex’s greatness; which as Spanish soldier Cieza de Leon wrote “… finally, it was one of the rich temples existing in the world.”

In the middle of the cloister’s central patio is an eight sided fountain carved in a single andesite piece that according to some historians it has Inkan manufacture. However, its shape and characteristics are not classical in Inkan stonemasonry. Therefore, if it was carved in Inkan times it must had another shape that was transformed in colonial times. Also today, around the archways there is a collection of canvases representing the life of Saint Dominic Guzman painted by anonymous local Cusquenian School artists.

After the distribution of houses and palaces during the Spanish invasion, the Qorikancha corresponded to Juan Pizarro who donated it to the Dominican Order represented by the first bishop of Qosqo City Fray Vicente Valverde. He immediately executed construction of their church and convent over the most important Inkan Temple demolishing it almost completely for adapting it to its new use. That original church was destroyed by an earthquake on March 31, 1650. Subsequently, the present-day structure was raised as well as the tower in 1780 with an elaborate baroque under direction of Fray Francisco Muñoz. On May 21st. 1950 another violent earthquake destroyed a large part of the convent and church as well as its tower leaving uncovered many Inkan structures and the interior area of the “Solar Round Building”. By that time a strong “Indigenist Movement” suggested the relocation of the church and recovery of the Sun Temple; it is a pity that Catholic Church’s political power did not allow that attempt for clearing the ruins of the major Tawantinsuyo’s sanctuary.