Huaraz is one of the major cities of the highlands of Peru; it is a place of arrival of adventure and mountains sports in the snowy peaks of the Cordillera Blanca, as well as tours to the archaeological site of Chavin.
The city of Huaraz, Capital of the department of Ancash, it is situated in the heart of Peruvian Andes with a 408 km from the north of Lima. It has an altitude of 3 080 meters above the sea level. The city is flanked by the Cordillera Blanca and Negra, east and west respectively, forming the valley properly known as the Callejon de Huaylas.
It is considered one of the most important touristic destinations in Peru, due to the natural beauty of its landscapes, archaeological monuments (pre – Inca and Inca) and varied folklore, is a privileged city with a grand natural and cultural heritage.
It is known as “The most noble and generous city of Huaraz”, this name was given by Simon Bolivar, because their inhabitants surrendered all their possessions, as well as civil and religious institutions to obtain funds, equipment, supplies and materials to equip the Liberation Army. And it is also known as the Capital of International Friendship, because after the earthquake of May 31, 1970, which destroyed the city, causing over 10,000 deaths, gained support worldwide, to help for quake survivors.
The people who decide to go to Huaraz will be able to appreciate the beautiful glaciers of the Cordillera Blanca or see the wonder that encloses the ancient temple of Chavin, the Llanganuco Lagoon and enjoy the endless attractions that this hospitality city has to offer. 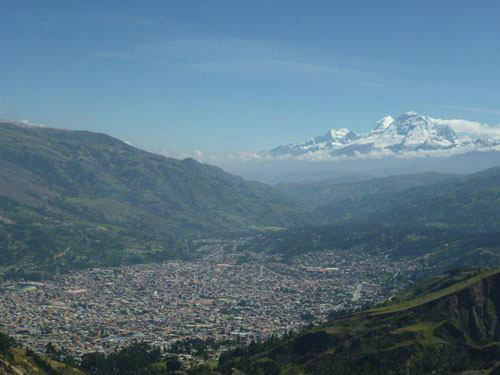 Pre – Hispanic
In January 1533 the Spanish conquerors passed through this area under the command of Hernando Pizarro, they were who described, for first time, the characteristics of this land, and say that it is fertile, with many cattle in the mountains and prosperous villages.
It is known that this in this era, there are human presence from 10,000 A.C., which belong to the time of hunters and gatherers, whose the sample is the Cave of Guitarrero. From that stage Huaraz had to go through several changes as the emergence of agriculture in the areas of Vicus and Quishqui. During the Early Horizon Chavin culture was developed and then the town planning, with the development of Waras and its center Pumacayan. On the medium Horizon is located the Culture Recuay. Then came the expansion of the Huari Empire, which has left important archaeological remains such as Waullac and Willcahuain. Finally, after the Wari Empire disappearance came the stage of Inca government.
Colonial Period
Huaraz was founded during the reign of Viceroy Francisco de Toledo. In 1538, Francisco Pizarro gives the parcel of Huaraz to the conqueror Sebastián de Torres, and in 1574 the captain Alonso de Santoyo founded the village with the name of San Sebastian of Huaraz with 14 districts, mainly serve as a mining settlement. During the years of 1537 and 1548 were developed struggles for the power and ended with the death of Sebastian Torres.
In 1576 the Viceroy Francisco de Toledo created the township of Huaylas and Huaraz was designated as headquarter of this township. Subsequently, the township changed by quartermasters because of those who committed abuses against the Indians.
The system imposed by the Bourbon dynasty on its overseas territories generated series problems like the rebellion by the Indians and mestizos who demanded changes in taxation, improvements in industry and free trade. It was under the reign of Charles III which resulted in a major upset in the population. Another fact was the implementation of the quartermaster in 1784, giving rise the one which was based in Tarma which was constituted by Huaylas, Conchucos and Huanuco. The capital of Huaylas was the town of San Sebastian of Huaraz, which was proposed to be raised to the rank of Village by the Viceroy Teodoro de Croix, for which established the creation of the City Council in late 1788 and was installed in January 1789, being the first mayor James del Real.
Republican Period
Established the headquarters of liberator Jose de San Martin in 1820, emissaries were sent to the city to declare the independence. Colonel Campino, who with 250 men, proclaimed the independence in the city of Huaraz. Juan Mata Arnao was elected provisional governor.
In February 1821, Jose de San Martin created the presidency of Huaylas, being the capital the city of San Sebastian of Huaraz. Marshal Toribio de Luzuriaga was the first prefect; he made a great work in laying the foundations of the new Peruvian society.
XX Century
In 1970, Huaraz hosted the first regional government in Peru with economic, political and administrative autonomy. It succeeded in modernizing the city with better roads and infrastructure. On May 31, 1970, there was a flood and earthquake, which devastated much of the Calejon de Huaylas and the Ancash coast. The city of Huaraz suffered a big damage, they had to rebuild and reshape the city. With the international help received, it was possible to built the highway Pativilca-Huaraz-Caraz and construction of solid materials. The President Francisco Morales Bermudez, created the first university in Ancash, the National University of Ancash Santiago Antunez de Mayolo.
Weather

The maximum temperature reaches 24 ° C and 7 ° C respectively. The climate in Huaraz has two distinct seasons. Mild and dry from May to September, common called “Andean Summer” the weather is nice this time of year, with bright sunny days and cold nights. The rainy season occurs between the months of October to April, the sun shines in the morning and rains at the afternoon.
Getting to Huaraz

By Air
The airline LC Peru offers flights to Huaraz with commercial departures from the airport in Lima, the flight takes one hour. Huaraz airport, German Arias Graziani, is located 20 km north of this city in the district of Anta – Carhuaz, 15 minutes.
By Land

Health & hygiene
– Consult at the pharmacy for the best medicine for altitude sickness, headache and dizziness.
– Get a check up before the trip
– Drink coca Tea as soon as you arrive to Huaraz
– Do not eat fatty food
For the trip
– We advise to have a previous acclimatization before a trek.
– Start with light activities with less altitude for acclimatization gradually.
– Bring sunglasses to be able of stand the reflexes of the sun in the snow.
– Mondays and Thursdays are special market days which attract a multitude of local people selling and buying typical products.
– Clothes to wear: coats, hats and gloves for evenings and caps, cream and sunglasses for the day.
– You can get more tourist information at the office of iPeru which is located in front of the Plaza de Armas.
Security &safety
– Follow the recommendations of tour guide and do not try to take other paths by yourself, you could get lost or be in a dangerous zone.
– It’s better if you take the bus on the morning and arrive in Huaraz the same day in the afternoon.
– We recommend counting with travel insurance during your trip
– In the bus station through the main streets of the city and within the hotels, there are people offering tours, they can cheat you, it is suggested not to use their services. It is better to use services of formal agencies travel, do not forget to require proof of payment.
Phone Code:
Dial 043
Public administration
Working hours of shops: Mon – Sun: 09:00-22:30.
Banks working hours: from 9am until 5pm.
Money Exchange

In the center of the city there are exchange houses, where you can exchange dollars and euros, do not change the street.
Traveler Checks

From pre-Inca times, the ancestral Ancash created and practiced their dances and songs. The main reasons that led these dances were farming (sowing, harvesting), pastoral work, falling in love, in honor of God, to remember the dead, and competition.
At the end of the thirteenth century, Ancash territories were incorporated into the Inca Empire, which meant that our music and dance receive the influence of some elements of folklore Cuzco and vice versa.
With the start of the Spanish conquest in 1532, gradually emerge dances focusing on the capture of the Inca Atahualpa and the reasons for ridicule or and imitation of the dances of the Spanish conquistadors. Some Typical dances are Antihuanquillas which is performed by 6 or 8 dancers to the accompaniment of a harp and two violins. His costume is a miter adorned with artificial flowers of colors, polychrome metal masks, a small poncho, vest of dark cloth and blue pants. Wancas or Wanquillas, this is a pre – Inca war dance; dancers simulate combat rounds as “wrap around” with multicolored dress. Shacshas, is a dance that consists of 10 to 20 people dancing with a captive center, wearing a hat or outfit with mirrors and sequins, a false curly hair, a woman’s blouse and lace cuffed pants, colored with his shin.
Nightlife
The nightlife in Huaraz is well-known in Peru. Especially from the May-October it is high season and the town never sleeps. There are lots of bars and discos where tourists and locals get fun and these are open every night of the week, although they are liveliest at weekends. A couple of cool and very popular bars are El Tambo (José de la Mar 776) and Las Kenas (Jr. Gabino Uribe 620). More Information >>>
Gastronomy
The gastronomy of Huaraz and the Callejon de Huaylas is varied and exquisite cuisine Andean testimony. Enjoy each of the dishes is a way to learn about the cultures of the people of the Callejon de Huaylas. Typical dishes out the Cuy Picante, Llunca Kashki with Gallina, Cuchicanca, Chicharron, Corn, Fried Trout, Api (sweet) Pumpkin, Tamales, Humitas, Pachamanca, Pecan Soup. All these delicacies can be accompanied with a Chicha de Jora.
The guinea pig style hot Huaracino, the pony-chasqui (a variety of above but served as a soup), potato-chasqui (soup with potatoes, milk and cheese), cassava-shupe (soup without fat served in the mornings after a night of fun), the pecan-caldo (lamb head broth), the huallpa-chasqui (chicken soup with walnuts and almonds) and chochoca humitas. Also are recommended to drink different types of fruit punch, according to the station. More information >>>
Restaurants
In Huaraz and the Callejon de Huaylas there are specialized restaurants that offer typical regional, national and international food. More information>>>