Caraz is part of the chain that links the central road called Callejon de Huaylas, the second city in importance of this, after Huaraz, which is the capital of the department. Caraz is located 15 km north of the city of Yungay and 67 km from the city of Huaraz. The temperate climate is pleasant throughout the year because its average temperature is between 16 º and 25 º degrees Celsius. Caraz is a small town, so basically you can walk through it on foot. The only public transport is taxis and motorbike taxis.
Among the places to visit in Caraz are pre-Hispanic settlements Tumshukayko, Pueblo Viejo and Inca Huain.
Plaza de Armas, inagurated on October 4, 1898, here is an old house in which facade there is an recordatory alpaca that says it was the accommodation of the Liberator Simon Bolivar. It also maintains a pool of 1891 and a kiosk retreats (Glorieta) built in 1927.
Paron Lagoon, the most important freshwater tank in Callejon de Huaylas, located 32 km east of Caraz and is surrounded by spectacular, steep snow. Located at the foot of Mount Pyramid Garcilazo 5.885 m, 4.185 meters of altitude. You can reach it by taxi or by mountain bike. The lagoon has a maximum length of 3,720 meters, maximum depth of 76 m, an area of 185 ha and a volume of 70,000,000 cubic meters. 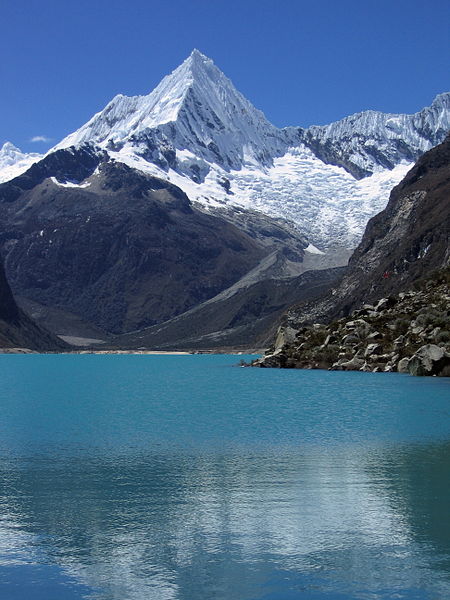 Puya Raimondi Hinchus, the largest stand of bromeliads known as “Puya Raimondi”, recorded in the Department of Ancash. It has an altitude of 4,200 m 46 km west of Caraz. It is a natural view from here is appreciated and 145 km of landscapes of the Cordillera Blanca. The Puya Raimondi is the world’s largest inflorescence, can live 100 years and grow to meters.
Santa Cruz Trek, is the most famous and spectacular trek in the Cordillera Blanca. To make the trek should take a taxi to the starting point Cashapampa (2,900 m). The trek can be done in 4 or 5 days. For orientation is best to use the map of the Alpine Club of the White Mountains area. The directives of the Huascaran National Park, recommend taking the services of a licensed Tour Operator.
Tumshukayko archaeological remains located in the District of New Victoria, at an approximate height of 2,300 meters. Tumshukayko has a rectangular shape; its structure is built of stone. Also found pottery and lithic events. Studies of ancient monument locate them between La Galgada (Pallasca) and Chavin, around 2000 and 1800 BC.