Callejon De Huaylas is located north of Lima, between the Pacific Ocean and the Marañon River. It is an Andean valley that is surrounded by the Cordillera Negra by the west, which is home of mountains of 5 100 meters, these are characterized by not presenting snow and the Cordillera Blanca by the east, the highest tropical mountain chain in the world with peaks over 6 000 meters covered of ice and snow. There are located the picturesque and pleasant cities like Recuay, Carhuas, Yungay, and Caras. The Callejon de Huaylas, which in Quechua means “meadow” is the ideal place not only to seek adventure, but to feel and appreciate the natural landscape of the Andes, as well as tour the Huascaran National Park and the stunning lagoons Llanganuco, and relax in the hot springs.
The Callejon extends forming a narrow and picturesque valley about 180 km. in length. Many of its summits are spectacular and breathtakingly beautiful. The Huascaran is one of the best known. The city of Huaraz is the center of the Callejon de Huaylas and serves as a base for almost all tours to the cities of Carhuaz, Yungay, Caraz, among other
In the Andean region there are over 260 lagoons, of which 192 empty into the Rio Santa. Very few lagoons have road access. The main shortcomings: Llanganuco, Paron, Churup Querococha, Cullicocha and others, it is possible to fish trout.
Cordillera Blanca
It is the highest tropical mountain range and beautiful in the world having an area of 180 km between Conococha and Huallanca, has an area of 720 km ² glacier, where there are 27 mountains that exceed 6,000 meters altitude, the highest being the Huascaran (6.768 m) and the most beautiful of the world, Alpamayo (5,947 m).
Cordillera Negra
Located west of the Cordillera Blanca, geological base is formed in volcanic rocks and its main altitudes: Rocarre (5.187 m.) Cancahua (5.102 m.) Rumicruz (5,020 m.), Cerro Rico (5.014 m. ) and Huancapetí (4.968 m.)
Cordillera Huayhuash
It extends for 30 kilometers long and is located on the southern boundary of the region, bordering the departments of Lima and Huanuco. This range has features himalayenses and 6 peaks over 6.000 meters. Its main access is through the city of Chiquián located 2 hours from the city of Huaraz. The area is ideal for adventure tourism and its main peaks Yerupajá, Jirishanca, Siulá, Carnicero, Trapecio and other 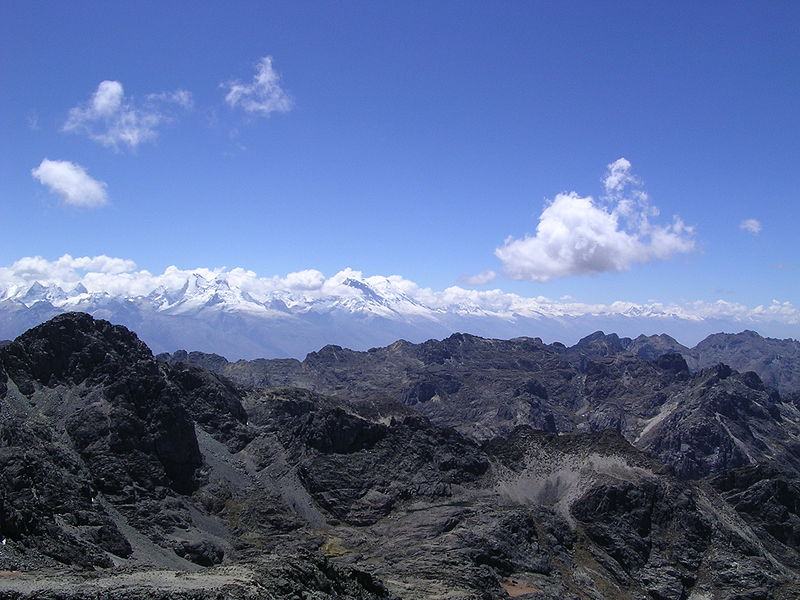