Pacha Kamaq (Quechua, “Creator of the World”; also Pacha Camac) was the deity worshipped in the city of Pachacamac by the Ichma.

The temple of Pachacamac is an archaeological site 40 km southeast of Lima, Peru in the Valley of the Lurín River. Most of the common buildings and temples were built c. 800-1450 CE, shortly before the arrival and conquest by the Inca Empire. To date, several pyramids have been uncovered; archaeologists have identified at least 17 pyramids. Besides pyramids, the site had a cemetery and multicolored fresco of fish from the Early Intermediate period (c. 200-600 CE).

The Inca maintained it as a religious shrine and allowed the Pachacamac priests to continue functioning independently of the Inca priesthood. This included the oracle, whom the Inca presumably consulted. The Inca built five additional buildings, including a temple to the sun on the main square.

Our tour will start at the Pucllana temple built in the IV century A.D., an ancestral and ceremonial site dedicated to the local divinities.

Guided tour of the splendid and vast archaeological citadel of Pachacamac, the temple of the deity, Pachacamac, believed to be the creator of the universe and a divinity adored by old Andean civilizations. A sacred and ceremonial site dating back to the beginnings of Christianity where thousands of pilgrims converged to pay tribute and consult the Pachacamac oracle, who they believed could see the past, the future and people’s fate.
The site comprises pyramidal temples and enclosures built by successive pre-Colombian civilizations and finally the Incas. Highlights include the Temple of Pachacamac, the Sun God shrine, and the Palace of the Chosen Women or Virgins of the Sun. At the site museum there is an idol of the deity, Pachacamac, which couldn’t be seen by the profane, and was reserved for the high priests who kept, revered and interpreted the divine oracle in the old times. A sacred site, the temple was considered to be part of the planet’s mystical axis. 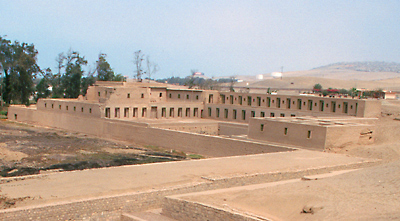 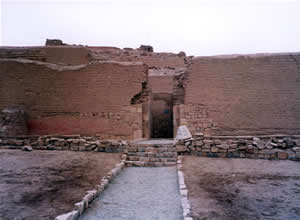 INCLUDES:
All scheduled transportation. All transfers. All scheduled excursions with English-speaking guide services. All entrance fees.

NOT INCLUDED IN THE FEE
Meals, International and domestic airfares, accommodations, alcoholic and non-alcoholic beverages or bottled water, snacks, insurance of any kind, phone calls, radio calls or messages, reconfirmation of flights and items of personal nature.
Useful Information