Lima Cathedral
Francisco Pizarro founded Lima to a site destined to the church which he dedicated to the Virgin of the Assumption, making Sinchi Puma give up their property notarized paper, to make the occupation of the site chosen for the church does not mean usurpation domain. Francisco Pizarro in 1535, laid the first stone and carried in public manifestation of faith and humility, the first tree for the edification of the church, first cathedral, which was made under the title of Our Lady of the Assumption, ending the construction in 1538 and inaugurated on March 11, 1540. Since 1991 the Cathedral is included as Cultural Heritage of Humanity to be in the Historic Centre of Lima and its visit is of rigor when people do tourism in Lima. During the week, the Cathedral offers tourists the religious grounds as a museum, which preserves notable works of art from colonial times. 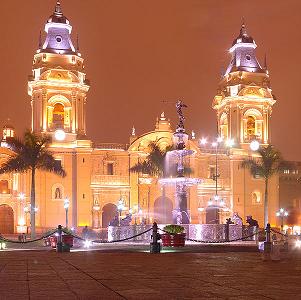 The Government Palace
It is the headquarters of the Peruvian executive and the official residence of the President of Peru. It includes a built area of 19,208 sqm. It is located in the Plaza Mayor of Lima’s historic center, on the banks of the Rimac River. The facade of the palace is of French-inspired neo-Baroque style, while the side facade is neoclassical style. About 200 people work there. Its first version was sent to build the Spanish founder of Lima Francisco Pizarro in 1536 on lands that were the chief Taulichusco. During the viceroyalty was called Viceroy Palace or Viceregal Palace because, during this time, was the residence of the viceroys during the colonial period. The current building dates from 1938 and was built during the second government of Oscar Benavides. Every day at 12:00 Cavalry Regiment, Mariscal Domingo Nieto, performs its traditional Changing of the Guard ceremony. 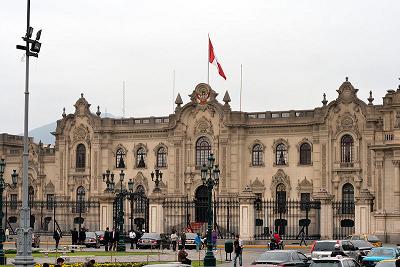 The Archbishop’s Palace
It is the residence of the Archbishop of Lima and the administrative seat of the Archdiocese of Lima, and it also houses the offices of Cardinal Juan Luis Cipriani. It is located in the Plaza Mayor of Lima’s historic center. The Archbishop’s Palace facade is neo-colonial architectural style. Has characteristic elements of Baroque and is made entirely of stone reinstated. On the central or main door, which is neoplateresque style, there are two large balconies, neo-baroque, carved cedar wood and reflect the sensuality of Andalucia. 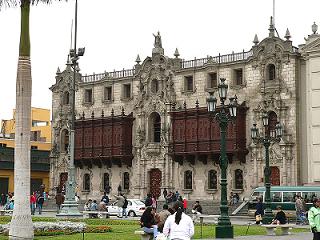 The Municipal Palace
It is the headquarters of the Metropolitan Municipality of Lima. It has several rooms like the Atahualpa Room, which is occupied by the Ladies Committee of the Municipality. His name is because had preserved inside, and for many years, the painting by Luis Montero the funeral of Atahualpa, who is currently in the Lima Art Museum. Among the paintings that are notable in this room is the picture of Daniel Hernandez Pizarro on horseback. Another is the Mirror room which is named for the presence of huge mirrors located on the main wall, visually extending the perspective of large Reception Room. Here is displayed a set clock and candelabra gilded bronze rococo. The Reception Room is conceived as a dance hall, with tribunes for orchestras, saved some pictures of Ignacio Merino, who donated his collection to the Metropolitan Municipality of Lima. Assembly hall, from here the city is administered. On the main stage there is a portrait of the founder of Lima, Francisco Pizarro, Spanish work of Julio Vila y Prades, surrounded by other paintings by some of the most important national life. A polychrome wood relief shows the effigy of Nicholas de Ribera, who was the first mayor of the city of Lima. We also found the Royal Coat of Arms of Lima, crest granted by Royal Warrant dated in Valladolid on December 7, 1537 by Emperor Charles V and his mother, Queen Juana I. 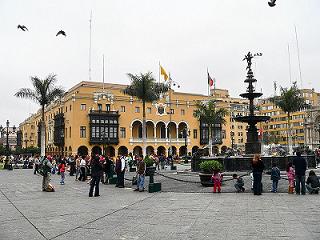 Union Club
Is a civil non-profit organization founded on October 10, 1868. Among its founders are several Peruvians who after the outbreak of the Pacific War became heroes, including Miguel Grau, Alfonso Ugarte and Francisco Bolognesi. Currently the Union Club has its headquarters in the heart of the historic center of Lima, in the Plaza Mayor. Its facilities occupy a traditional palace called Palacio de la Union. Was opened in 1942 and is considered Monumental Heritage of the Nation by the National Institute of Culture of Peru and with the Government Palace of Peru, Lima Cathedral, Archbishop’s Palace of Lima and Lima Municipal Palace set up architecture of the Plaza Mayor of Lima. It also has a beach sit located in the district of Santa Rosa, where they are also sports facilities.