Callao is the largest and most important port in Peru. The city is coterminous with the Constitutional Province of Callao, the only province of the Callao Region. Callao is located west of Lima, the country’s capital, and is part of the Lima Metropolitan Area, a large metropolis that holds almost one-third of Peru’s population. Callao borders Lima Province on the north, east and south, and the Pacific Ocean on the west.
Callao is built on and around a peninsula, the district of La Punta, a wealthy residential neighborhood. An historical fortress, the Castillo de Real Felipe (site of “Rodil’s Last Stand”), stands on the promontory overlooking the harbor.
Lima’s Jorge Chávez International Airport is located in Callao.
Callao has several islands: San Lorenzo (currently a military base), El Frontón (a former high security prison), the Cavinzas, and the Palominos, where numerous sea lions and sea birds live in a virtually untouched ecosystem. There are proposed plans to build a huge naval, terrestrial, and air port on San Lorenzo Island. This project is called the San Lorenzo Megaport Project.

Pick up from Hotel and transfer to Callao.
Discover the incredible secrets and history that the Callao Port guards in a tour through the Real Felipe Fortress, the most important example of colonial military architecture in “Spanish America”. It was built to defend the capital of sieges by pirates and corsairs during the times of the Viceroy Count of Superunda.
Visit the Military History Museum Real Felipe, is the largest tourist attraction Callao. It is located in the bay of Callao. Currently, the strength
is a lower base of the Peruvian Army. It also houses the Museum of Army and is open to the general public, domestic and foreign tourists. The
Visits are conducted in tours conducted by the military in which tells the story of the fort.
Learn the thrilling stories of naval combats, blockades and corsairs’ attacks that the Real Felipe has experienced in over three centuries of history. Visit the King’s Tower, the Governor’s House and the gloomy Casamatas of vaulted ceilings.
The view of the sea and from Callao strength explains very well why he was chosen by area Spanish to build their defenses.
The sea in the southern part of the peninsula is a rough sea and strong currents making a landing impossible creating a natural barrier.
The sea in northern part of the peninsula is where the Bay of Callao with its calm waters and where do all marine activities and port.
Visit the picturesque coastline neighborhood of Chucuito and its colorful architecture, as well as the beautiful La Punta area. 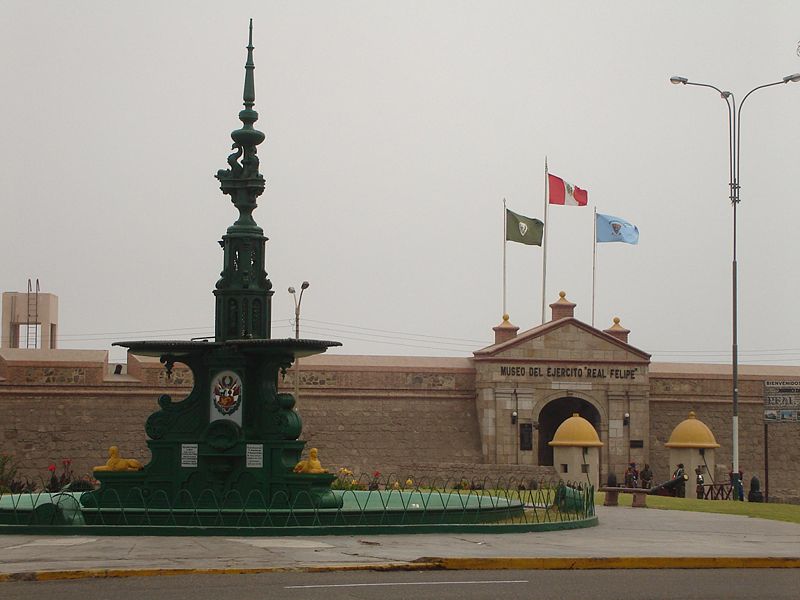 NOT INCLUDED IN THE FEE
International and domestic airfares, accommodations, alcoholic and non-alcoholic beverages or bottled water, snacks, insurance of any kind, phone calls, radio calls or messages, reconfirmation of flights and items of personal nature.
Useful Information