The Nazca Lines are ancient geoglyphs which are located in Pampas of Jumana in the Nazca Desert, between the towns of Nazca and Palpa.

They were drawn by the Nazca culture and are composed of several hundreds of figures ranging from designs as simple lines to complex zoomorphic, geometric and phytomorphic figures that are drawn on the surface. The drawings are well proportioned, especially if one thinks of its dimensions. These lines are also evidence of a large geometrical knowledge of the ancient inhabitants of this area, which were declared part of Peru’s cultural heritage. 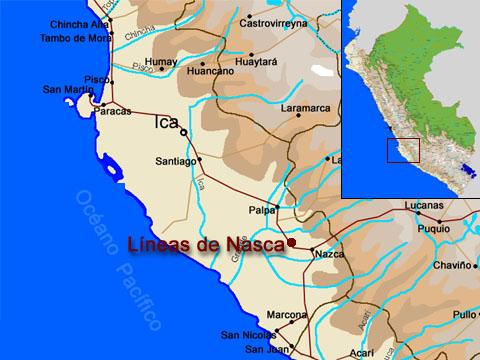 The Nazca Lines are located in the arid Peruvian coastal plain, some 250 miles (400 kilometers) south of Lima. The geoglyphs of Nazca and Pampas de Jumana cover about 175 square miles (450 square kilometers). The Nazca Lines are almost impossible to discern from the ground level. Instead, the best way to view these enormous geoglyphs are from an aerial view in a plane!
Famous figures you may see from the air include a monkey, a spider, hummingbird, and so many more.
Read more about Nazca Lines Facts.