The Amazon Rainforest is a vast region that spans the border of eight rapidly developing countries: Brazil, Bolivia, Peru, Ecuador, Colombia, Venezuela, Guyana, Suriname and French Guiana, an overseas territory of France.
The landscape contains:
* One in ten known species on Earth
* 1.4 billion acres of dense forests, half of the planet’s remaining tropical forests
* 4,100 miles of winding rivers
* 2.6 million square miles, about 40 percent of South America, in the Amazon Basin
Reflecting environmental conditions as well as past human influence, the Amazon is made up of a mosaic of ecosystems and vegetation types including rainforests, seasonal forests, deciduous forests, flooded forests, and savannas. The basin is drained by the Amazon River, the world’s largest river in terms of discharge, and the second longest river in the world after the Nile. The river is made up of over 1,100 tributaries, 17 of which are longer than 1000 miles, and two of which (the Negro and the Madeira in Brazil) are larger, in terms of volume, than the Congo (formerly the Zaire) river. The river system is the lifeline of the forest and its history plays an important part in the development of its rainforests.
The Amazon Rainforest covers every corner east of the Andes, from the Equator to the southern borders with Brazil and Bolivia. Peru’s Amazon Rainforest sustains the World’s richest biodiversity, in particular within the Manu, Pacaya Samiria, and Tambopata natural sanctuaries.
THE AMAZON RIVER TODAY
Today the Amazon River is the MOST voluminous river on Earth, eleven times the volume of the Mississippi, and drains an area equivalent in size to the United States. During The high water season, the river’s mouth may be 300 miles wide and every day up to 500 billion cubic feet of water (5,787,037 cubic feet / sec) flow Into the Atlantic. For reference, the Amazon’s daily freshwater discharge Into the Atlantic is enough to supply New York City’s freshwater Needs for nine years. The force of the current – from sheer water volume alone – you cause Amazon River water to continue flowing 125 miles out to sea Before mixing with Atlantic salt water. Early sailors Could drink freshwater out of the ocean Before sighting the South American continent.
The river current tons of suspended sediment Carries all the way from the Andes and Gives the river a characteristic muddy whitewater appearance. It is Calculated 106 million cubic feet That of suspended sediment are swept Into the ocean Each Day. The result from the silt at the mouth of Deposited Amazon is Majaro the island, a river island about the size of Switzerland. 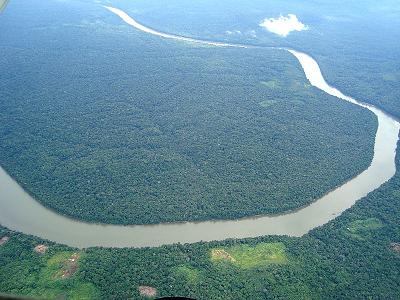