Trujillo, City of Eternal Spring. Located in the northeastern part of Peru, is the capital of the department of La Libertad.
Trujillo, is close to the Pacific coast, in a coastal desert.
Founded in 1534 by Miguel de Estete and well fortified to prevent the assault of the pirates.
It was provisional capital of Peru for their independence.
It works as a commercial center of the region La Libertad, where cultivated sugarcane and rice. It is also a distribution center of goods and has establishments in the textile and food.

The department of La Libertad has a relief ranging from the coast, passing through the mountains (Andes) of Otuzco, and Santiago de Chuco Julcan to the high forest (Amazon) at The edge of San Martin. 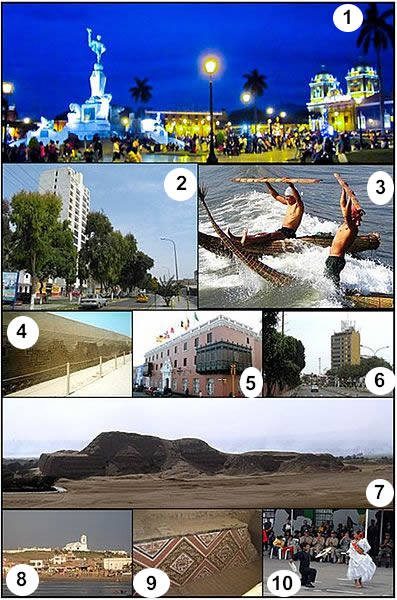 The city of Trujillo is characterized by arid and semi, with an average maximum temperature of 22, 7 º C (72.9 º F), and a minimum of 15, 8 ° C (60.4 º F) with no rain throughout year.
However, when it presents the phenomenon of El Niño, the climate varies, the level of rainfall and temperature can be raised.

The first traces of the past in Liberty back over 10,000 years. For the first inhabitants engaged in fishing, hunting and gathering, followed by horticulturists and later came the ceremonial centers.
Ancient cultures as Cupisnique, Viru Salinar or laid the foundations for the development of the cultural tradition of the north coast.
With the Mochica culture (I-VII centuries) state organization was born in Peru. The adobe pyramids located in the valleys of Liberty are testimony to the power and wealth of the ancient Moche lords.
This town masterfully domino jewelry and pottery, which portrayed various aspects of his life.
The same area, around the twelfth century AD, was the birthplace of the Chimu culture. Successive lords Chimú built the city of Chan Chan, from which organized its expansion along the coast.
Advanced irrigation techniques and excellent jewelery characterized this culture in the fifteenth century was conquered by the Incas.
A few years after the arrival of the conquistadors to Peru, Diego de Almagro founded, the December 6, 1534, the town of Trujillo in New Castile, a city that with the passing of the years was inhabited landowners and acquiring increasingly Moreover, the noble spirit that still retains.
Estete was Martin who drew the map, delineating blocks, whose streets are like a chess board.
Trujillo promptly joined the cause of emancipation, not in vain was the first city to declare independence.
His gallant and patriotic spirit led Congress to change the name of the department of Trujillo in La Libertad, in 1825.
By the early twentieth century Liberty was characterized by its agricultural wealth and was populated by large estates devoted especially to the cultivation of sugar.
Agrarian reform in the 1970s, became the oldest estates in cooperatives in the hands of the workers themselves. Today, rice, sugarcane and asparagus are the most important crops in the lands of the region.

Trujillo has many tourist attractions; this is the reason that every day comes to Trujillo many tourists from around the world to see and learn more about our country.

Health
– We recommend to not drink water from the tube, it is better to buy a bottle of water to avoid while traveling to Trujillo to prevent contracting any harmful parasites or water-borne illnesses. Also you have to be sure to travel with water purification tablets or boil water for 15 minutes to eliminate any harmful bacteria.
Security and Safe
– Trujillo is a relatively safe city. But, you should always use common sense and keep aware of your surroundings, especially late at night.
-Don’t travel alone at night, don’t carry large amounts of cash or exterior signs of wealth and avoid areas that are known for being known as unsafe.
-If you have to take a taxi on the street, be sure to get on a yellow cab
If you get a taxi at a hotel, you will pay a hire fare for the ride but you will be absolutely safe and the car will be in much better shape.
Never allow for another passenger to get in the taxi with you and always agree on the fare before you board the taxi.
For The Trip
– Bring Light clothes for the morning, sunscreen, hats, swimwear, and warm clothes for the night.
– For tips, if you feel you have received good service with guides, transportation, hotel staff, waiters, encouraging them to follow each day to provide a better service could give you a tip. The amount is related to the quality of service you received. 10% is appropriate and welcome.
– Credit cards as Visa, MasterCard, American Express and Diners Club are widely accepted. In some places, such as craft shops and small businesses, when you pay by credit card, it is possible that this individual minimum amount or a surcharge of between 5% and 8% due to bank charges.
– May achieve better discounts if offers to pay in cash.
-Checks for travelers, you have to change them at banks or authorized exchange houses, is subject to a commission of approximately 2%, you will need your passport to make this change.
Electrical Outlets
the voltage used in Peru is 220V. Many electrical appliances are 110V voltage. Make sure the device you will use is “dual” or having an appropriate converter.
The plug is normally used:220V 60Hz

The City of Trujillo and the region La Libertad, has different dances of Peru’s north coast, including certainly the northern fishing holds a special place.
Trujillo is a center of popular expressions which are gaining world-class as the National Contest of Marinera, a typical dance competition that originates in the ethnic mix.
Coexist with other marine coastal northern dances as:
• The celebrations
• The tondero and
• The waltzes.
The International Spring Festival is a celebration of almost a week that ends with a big parade or parade through the wide avenues, brimming with color and joy in their path and concentrating the beauty of women cited in Trujillo.
The set is complemented with Art Biennials and international ballet festivals that are exposed and their ancient, high artistic quality of its people.
In the north, also not lost the habit of cockfighting and breeding Paso horses.

La Marinera: The word comes from Ocean Seafoods, says the movement of clothing and body that makes the dancer, like the waves of the sea.
This name gave us great writer Don Abelardo Gamarra, better known as Rogue, in 1879, the declaration of war with Chile and because of the feats performed our Peruvian Ship “Huascar” ‘commanded by our Great Admiral Don Miguel Grau seminario.
The Peruvian Horse
It is considered unique in its kind by the peculiar anatomical conformation and external forms. This issue is considered “national heritage” and is a silent ambassador.
With all these qualities, is considered the best Saddle Horse World “, its lateral displacement four-footed steps allows rhythmic, harmonious and pleasant in their center of gravity remains stationary, giving a comfortable riding smoothly, and its genetic basis is the product of 400 years of selection, crossover and blood typing that Peru has one.

Trujillo has a variety cuisine, with delicious dishes, drinks and deserts, that you can taste in the most representative restaurants there. We give you an extensive list with the most recommended restaurants by tourists.
List of restaurants in Trujillo>>>

For people who want to dance and have fun, there are many bars and disco in Trujillo where people can dance Latin music, pop and Rock music and expend a great time with friends; most clubs are located at the main square.
List with more information >>>