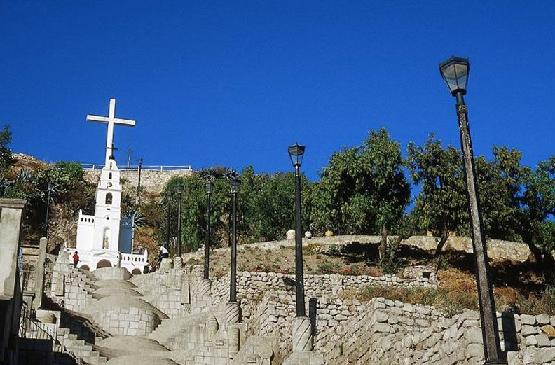 This hill of Santa Apolinia has a height of 2.764 meters over sea level.

Located on the west side of the valley and the city of Cajamarca.
The hill of Santa Apolonia previously known by the name Rumi Tiana or “Stone Seat.” The Chavin culture is amending the top of Cerro Santa Apolonia in the year 1200 BC. The Chavin culture built platforms and some underground structures on the hill and was used as tombs.
The tombs were built in Santa Apolonia were important people of Cajamarca.
The town of Cajamarca in the seventh century used the Hill of Santa Apolonia for worship to rain, lightning and the stars.
This place has maintained for many centuries as an exclusive shrine for worship.
The summit of Cerro Santa Apolonia is 500 meters higher than the city.
He has this beautiful gazebo is entered by Jr. Dos de Mayo, two blocks from the Plaza de Armas. Noteworthy among the steps and gardens, a chapel dedicated to Our Lady of Fatima where the faithful worship him.
The May 13th is a holiday in this mountain because in the chapel of Santa Apolonia is celebrated on the day of the Virgin of Fatima.
The Cerro Santa Apolonia is a strategic point to appreciate the city and the valley of Cajamarca. In the borders there are some vestiges of pre-Hispanic constructions such as the “Silla del Inca”.
The Chair of the Inca consisted of two stone blocks that emerge from the same hill and have been carefully carved to give them their present form.

Anytime is good to visit this place, come, visit and relax enjoying a friendly atmosphere at any time of year.