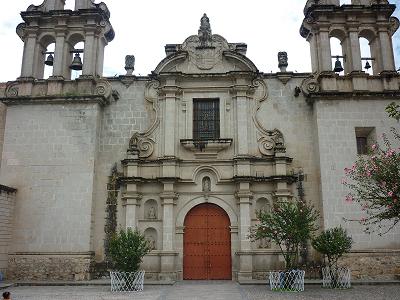 The Recollect Church is located at the intersection of Avenue “Heroes” the Avenue “El Maestro” in the district of San Sebastián. Built in the eighteenth century, the facade of the Church of Recoleta is simple carved in stone and decorated by slender triple arch. Currently works in this Church School “San Ramon” and kindergarten “Santa Teresita” and the old School of Women “Bethlehem.”
The faith of the population of Cajamarca its reflected in the buildings of the different Churches , which are in the center of the city. Like San Francisco, Catedral and Belen.
However, there is one church with remarkable for the archaeological design, this church is the Recoleta, located in the intersection of Heroes avenue and Maestro, which was built in XVIII century. As a the others church this one was made of volcanic rock. The facade was built with neoclasic elements. In this temple are the image of San Sebastian patron of the district of the same name, one of the largest in Cajamarca.
This place has a particulary story,  the chroniclers cajamarquinos said when Peru has the war with Chile, the invasors pretended to steal this temple, but in this moment an earthquake began. And the soldiers was inside of the church, upon the occurrence of natural phenomenon, they run away for be safe, so the cajamarquinos believed that there was a divine intervention.