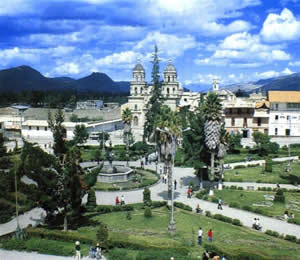 The Plaza de Armas of Cajamarca has an altitude of 2,750 meters above sea level.
Is square and is north of Holy Hill Poland.
Its total area is 21.373 m2.
The main square is bordered by the Wisp: Trade and Dos de Mayo.
History of the Plaza de Armas. It is called the Plaza Mayor in 1699 to be mayor of Cajamarca Juan Antonio Arostegui.
In that same year to begin having parades, rallies and military parades civic patriotic. This Square in those years also served for afternoon bullfights, cockfights and late nineteenth century served as a market.
In 1932 the main square of Cajamarca undergoes remodeling, is placed kerosene lamps, benches and was renamed. The prefect and the mayor Octavio Alejandro Alva Castro put the name of Place de la Concorde, a name that does not last long.
In 1945 the Lord Mayor Carlos Malpica Rivarola remodeling the Plaza de Armas of Cajamarca planting cypress trees we enjoy today and place granite floors and cement. All that remains of the old Plaza Mayor is the pool.
The place where the pool is the place where the Spanish capturated the Inca Atahualpa in 1532. The particularity of this Square is in this square was the scenary of a cruel battle. the Inca Atahualpa was in the “The Baños del Inca” when Francisco pizarro send Hernando de Soto with 20 horseman and one interpreter to say to the Inca that Pizarro was waiting for him in the Main Square of Cajamarca. the next day the spanish were hide in the principal buildings of the place, and were waiting. a few hours later arrives Atahualpa with 30.000 men, but all of them were so confident that they were unarmed. Then in the square appeared the friar Valverde, with the interpreter Felipillo, Valverde made the requirement where he was ordered to accept Christianity as true religion and submit to King Charles I of Spain and Pope Clement VII, then the friar offered to Atahualpa the holy bible, but for Atahualpa this book didn´t have a sense for him a threw this things out. This action caused outrage in the Spanish, who immediately broke the silence by firing artillery and rifles. that day more than 20.000 people died at the encouter.