The flora in Peru is very diverse due to different climatic and physical conditions of the territory. Many professional and tourist come to study the Rainforest plants and for the flora observation. The rainforest vegetation is represented by tropical forests, where alternate innumerable wood tree species of diverse quality as well as palm trees and Orchid, this is very attractive for forest insects. The plants provide shelter and food for animals.
20% of the world’s plant species are found in the rainforests. In the lagoons along the Amazon River is the Victoria Amazon plant, whose circulars leaves reach over a meter in diameter. The rainforest plants grow because the weather is warm and humid for being in a tropical area. The humidity is very important as suits them. The plants that are carnivorous are because they have adapted to live in places with dry ground (low water). Many forest plants are medicines, some of them can be eaten directly. In the Peruvian Amazon, there are a variety of medicinal herbs and trees, which have healing properties thanks to the kind spirits that inhabit them.
The heights of the trees are home of numerous animals such as monkeys and birds of different species that rarely or never descend to the ground. The warmth and humidity, the gloom of the lowlands, excess of lianas and creepers make difficult the penetration of man into the jungle, possible only through the rivers, which are the main communication channel in these regions.
There is great diversity of flora in the Amazon of Peru, can be found from grasses, shrubs, lianas, epiphytes and climbers even giant trees. It also features different habitats, so it is considered one of the most biodiversity in the world. In the Peruvian Amazon are two different types of forests, flooded forests, due to the rise of the rivers, and upland forests or high.
The flora of the high forest ecoregion is diverse in tree species and epiphytes, especially orchids, bromeliads, ferns, mosses and lichens.
In the lower areas the forest is very high, leafy, sometimes difficult to penetrate, but as altitude increases it becomes less high, while epiphytes begin to occupy an increasingly larger, until culminating in the elfin forest.
Orchids: Peru has a large variety of orchids, some restricted to their natural regions. They are epiphytic or terrestrial. They grow between 100 and 4 600 meters. Many of them are endanger due to illegal trade and deforestation of their habitat. Of the 30 000 species of orchids in Peru grow more than 3 000. They live in lowland.
Uña de Gato (Cat’s claw): A climbing plant which has medicinal use, it reaches 15 meters. This plan is original of Peru, which grows in the wilds of the Peruvian jungle. It is used as traditional medicine for the ethnicity of the Ashaninka, and applied for many centuries to heal deep wounds and to relieve bone pain, for the kidneys and to treat women after childbirth. 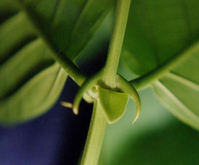 Heliconia: Is a genus which includes over 100 species of tropical plants. Herbs are from 1 to 7 meters high, it has simple leaves.

The Lupuna tree (Ceiba Pentandra): Occupies a very important position in the ecosystem of the Amazon rainforest. Provides shelter and food for many varieties of Amazon wildlife
Cattleya: Is a genus of between 50 and 75 species of epiphytic orchids. They are found in mountain forests of fog and humidity at altitudes from 1000 to 1500 meters. Require much light; they can be exposed to almost direct light.
Screw: It is a tree species belonging to the legume family. It is slow growing, tolerates drought well. It reaches 30 to 50 m high. is currently the most promising native tree species in the Peruvian Amazon. Is a forest with valuable timber features and has widespread use in Peru. It is considered among the five tree species most prized by the Amazon villager from economically and commercially is one of the most commonly used woods.
Huasai: The huasai has many medicinal properties: it acts against the fever, malaria, jaundice, diabetes, bleeding, muscle pain, liver and kidney damage.
Sangre de Grado: Since ancient times, traditional medicine has used the red latex of this tree for the healing of external wounds and stomach and intestinal ulcers. Sangre de grado also acts against rheumatic swellings, hemorrhoids, pharyngitis, tonsillitis, and malaria. It also helps in childbirth, serving as antiseptic and contraceptive properties. 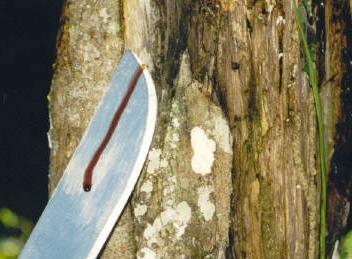 Oje: The Oje is a tree whose bark produces a milky white latex that fights uta, rheumatism, toothache and snakebite. Furthermore, it is an effective blood purifier and a powerful health restorative. What’s more, the decoction of the leaves acts against anemia and fever.
Copaiba: The balsam or copaiba resin is used as a healing, antiseptic, anti-arthritic, anti-inflammatory, antifungal, controls acne, and acts against psoriasis, herpes, rheumatism, tonsillitis, cancer, cough, chronic bronchitis, asthma, stomach ulcers, leucorrhoea, pain ear, hemorrhoids, tetanus and muscle aches.
Cedar: The bark, resin, cedar leaves and flowers have many medicinal qualities, they act against fever, cough, uta, gangrene, diarrhea, malaria and toothaches. It is also effective for urinary diseases, skin wounds and snake bites.