The roads varied in quality and size, so much so that in the plains and mountains can be six to eight meters wide, while in the mountains the paving of large stone blocks averaging meter wide, but were much more daring and aggressiveness overcame the rugged Andean terrain.
The Inca Trail in the section that is commonly between km. 88 of the railway to Machu Picchu, accounts for 90% of trekking or walks that take place in Cusco, however, is not the only route there are others of duration of one or more days to areas near the valley, which run roads picturesque landscapes of the area.
There are several miles of ancient roads, one of them is in the Cusco-Abancay to 3 km. City of Arc. There is another near the town of Qhorqa, about 20 km. west of Cusco.
En route from Juch `uy Qosqo, in the province of Calca, features another Inca road. Many of these roads have been built so perfectly, that even today, continue to be used without major modifications.
Today tens of thousands of tourists come each year to Cuzco for the sole purpose to walk the famous Inca Trail tours. The experience is so fascinating that his fame has gone around the world. The rich flora and fauna, the variety of landscapes from a step on the four thousand feet up the road surrounded by lush jungle vegetation over, exceeding expectations. People come from all over the world to know and experience the same trail that the Incas walked more than five hundred years.
The Inca roads or Capac Nan, were without doubt one of the wonders of Tahuantinsuyo, according to Peruvian historian José Antonio del Busto. He explains that: “The monarch who most increased the road network was Huayna Capac, who built and improved the way many of his empire. It is said he readily made to mobilize his army and thus able to crush any of the great rebellions that arose during his administration. ” This is due the 16 thousand kilometers of roads were completed under his reign.
The Inca roads were built by men on foot when needed who used the flames, but were a bit heavy. Most of these roads were useless for the Spanish, as the horses fell on the stairs and was docked. Trucks and coaches never were able to move around.
Peruvian historian José Antonio del Busto argues that the Incas were the paths to the speed of people and the agility of their beasts of burden, and for that reason is usually made in a straight line, with short steps, ramps and to open tunnels in rock.
The Spanish conquistadors arrived in Cusco when they were amazed at the perfection and finish of the roads.
Several chroniclers testify to the beauty of these roads, to Hernando Pizarro, one of the first conquerors to reach Cusco, could not hide his admiration in a letter that states the following:
“The mountain road is something to see, because in truth so rugged, in Christendom have not seen such fine roads, most of the road. All streams have bridges of stone or wood. In a river so large it was very plentiful, I spent twice, network bridges found that it is marvelous to see. ”
The Spanish chronicler Agustin de Zarate in his “History of the Discovery and Conquest of Peru”, wrote:
“When Huayna Capac was from Cuzco to Quito, which is five hundred miles away, ordered a road across the mountain range in the mountains, very wide and very flat, breaking and equaling the rocks where it was necessary, matching up the creeks and masonry, so that sometimes the work rose from fifteen to twenty states of deep and so hard this road for about five hundred leagues.”
The Inca Trail still exists and was discovered by Hiram Bingham when performing cleaning work between 1,913 and 1,915.
What is known as the Inca Trail is a short stretch in what was the network of Inca roads throughout the country. This section takes on special importance because it links different sites between Ollantaytambo and Machu Picchu, where you can notice the variety of architectural resources that give rationality, importance and because they say the ancient mystical Imperial Way. 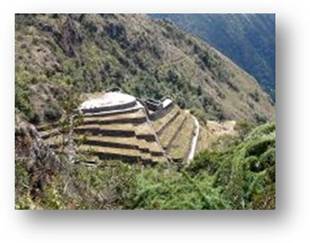