Cusco Inca trail tour is very popular in South America due to its exciting combination of adventure, nature and culture and the unforgettable experience that led you to be close of the stunning citadel that was created by an important civilization as was the Inca Empire which nowadays continue surprising to everybody around the world.

Before to do this amazing route is recommend to stay in the city of Cusco a couple days in order to get some previous acclimatization, take some rest, and eat light lunch and try not to do too much effort. Also you can realize the sacred valley tour which has wonderful places with a lot of interesting aircraft market being the most popular Pisac, certainly would be a good option for adjust to the altitude.

The Inca Trail connects the city of Cuzco to Machu Picchu. To start the tour should be from outside the city (Trek 4 days) or, for more or less athletic rush from an intermediate point (Trek 2 days). It is noteworthy that the Inca Trail can be done only in one direction, from Cuzco to Machu Picchu, the return is always in a powered (usually by train but it is also possible to return by bus).

The dry season, which is important in the trip, is from mid April through October. The tourist season when the place is full of tourists is from June to August. We prefer the seasons of April, May, September and October when visitors are few and are still dry. The rainy season is from December to May. Sometimes heavy rainfall for two or three hours each evening, as well as the possibility of light rains continues for long periods. In this period the conditions are difficult hike and streams become impassable. Be sure to bring your necessary equipment.

The Inca Trail is a trekking (hike) which departs from the mythical mile 82, near Ollantaytambo. You cover parts of what were once the paths used by the Incas to communicate different cities of his empire. Of the various alternatives available, the most common and popular lasts 4 days.

The first day will travel a few kilometers and are usually helpful for acclimatization to the height and weight of our backpacks. The second day is more demanding because it reaches a height of 4,200 m, higher than that most people are accustomed. The third day is usually quiet; at least not so much the height varies. The fourth day starts early, as most of the guides that the group tries to get to La Puerta del Sol to see the sunrise over the citadel from there.

Throughout all the way Inca ruins can be observed from different periods and different functions. Also we will find many vendors that offer from Gatorade to chocolate bars and water.

This lovely route is characterized by present original Inca architecture, a number of archaeological remains scattered along its course and the natural mixture of jungle and cloud forest in which it develops its travel, the environment is fresh and appealing to anyone wanting to make this program culminating with a visit to the magnificent Sanctuary of Machupicchu. 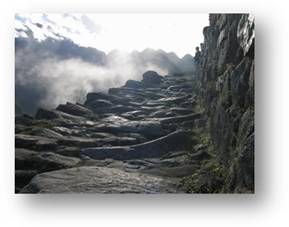