The only Inca town where many residents still live in the ancient Inca buildings dating back centuries.
Here you can see streets and houses Incas almost intact, a great temple built with huge stones in a very fine architectural style and a sanctuary with canals and waterfalls. Ollantaytambo has its railway station where you can leave for Machu Picchu instead of from Cusco.

If required we can recommend a wide range of hotels for all budgets.

At the opposite end to Pisac and 80 km from the city of Cusco find the village of Ollantaytambo, where the design space of the archaeological complex is indistinguishable from the present town. In this district of the province of Urubamba is reached by paved road Chinchero – Urubamba, and also by rail (68 kilometers). It is 2.700 meters high, and as noted, both the design and the foundation of most of its buildings are for the time of the Incas.
The origin of the name has several approaches. According to the Aymara language, Ollantaytambo comes from the word ulla-nta-wi, which means “place to look down,” the word tambo, is added later. For the Quechua language, the name comes from the word Ollanta (which is the name of an Inca captain, whose story was saved as an oral tradition and written as a drama by Antonio Valdez, a priest of Urubamba in the mid-eighteenth century) and the term, tambo, a Spanish derivation of the word Quechua tampu, which means “city that offers accommodation, food and comfort to travelers.” 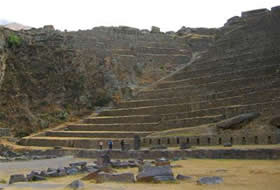 In Ollantaytambo the weather is dry from mid-April to early December and rainy during the months of January, February, March and first week of April. Due to its location of two valleys in the evenings usually runs a moderate wind. The minimum temperature is 11 ‘to 5’C and a maximum of 18’ at 23’C throughout the year.
The fortress of Ollantaytambo
The fortress of Ollantaytambo was a strategic military, religious and agricultural. The scenario is of exceptional architectural interest in the size, style and originality of its buildings.
It is one of the major attractions for both foreign tourists to the national tourist, where part of the fortress has the shape of a flame resting with her infant, can also be seen on the side of the fortress a hill that is shaped like a condor in flight position and in front of the platform you can see a hill with the shape of a head of an Inca.
Architecture
This is one of the most monumental archeological complex of Inca society, commonly called “fortress” because of its massive walls was actually a “tambo” or city-property strategically located to dominate and protect the sacred valley.
The architecture used and the quality of the stone and worked individually Ollantaytambo make a surprising and unimaginable unique work of art that was made during the Inca period, especially the “Temple of the Sun” along with its gigantic monoliths, also highlights Inca baths and ñusta and irrigation system.
The straight streets, narrow and quaint today are fifteen blocks of houses located north of the main plaza of the population, which is in itself a true historical legacy. Some colonial-style houses are built on Inca walls beautiful finely polished. The tones of the stone are cheerful, a petrified flower color, dark pink. In the main square a large block of perfect edges in a double row fits his fifteen angles terrestrial star. 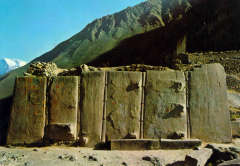