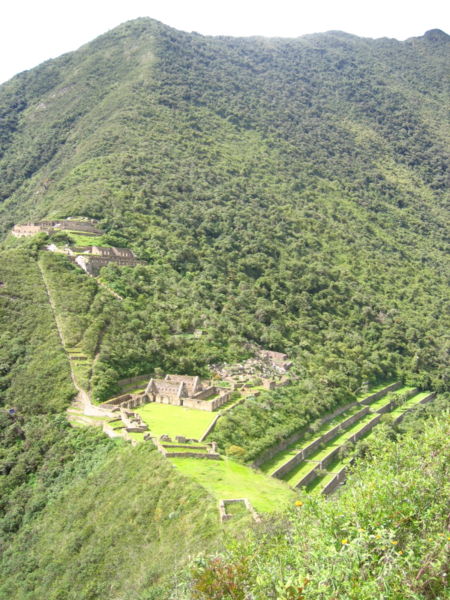 Choquequirao comes from the Quechua word “Chuqui K ‘iraw”, which means Cradle of Gold, this archeological site, is known as the other Machu Picchu, due to its similar characteristics of its construction and structures that form a series of architectural complexes in the Valley of Vilcabamba; according to the history, it was the last Inca archaeological site, that served them as a shelter around 40 years, during the resistance to the Spanish invaders.

Also Choquequirao it was a religious, political and social center, and became in an important hub of the cultural and economic exchange between the coast and the highlands and has an extraordinary view to the side of Rio Blanco and Apurimac Canyon. At the distance you can see the fabulous snow Salcantay.
In addition, many experts say that the environment of Choquequirao is one of the richest biodiversity in the high jungle, because of its very diverse fauna and flora species. For all these reason nowadays this impressive archaeological site recently has increased a tourist and cultural importance and definitely is an excellent option for all the adventurous travelers.
Location: At the north of the Apurimac River Valley in the province of La Convención in Cusco. It is approximately from a distance of 47 km to the town of Cachora. (Department of Apurimac)
Altitude: 3,085 m.s.n.m
Latitude: South latitude 13 ° 32 ‘ and west longitude 72 ° 44’
Extension: 1810 hectares.
Weather

Choquequirao has a warm weather with cold temperatures at night. The average annual temperature is 16 º C.
Best Time to go Choquequirao

You can visit Choquequirao most of the year, but the best time is between the months of May to November due to is the dry season. It is not recommendable during the rainy season (December to March) in which the road becomes muddy and impossible to walk.
Getting to Choquequirao

There is two ways to get there, by land or by helicopter.
By Land

Currently by land is the only way to reach the citadel of Choquequirao. If you want to get to this spectacular site, definitely you need to have an adventurous spirit and love to walk. The journey to Choquequirao is long and strenuous, but certainly memorable and highly remarkable.) Parting from Cusco to the road that goes to Abancay, then at mile 154 you should take the detour to the town of Cachora, the last village before reaching the archaeological site. From there you choose to go on horseback or on foot.
The road has recently been extended and fixed. Go to there, is now more comfortable and secure. But anyway, Arriving at Choquequirao requires good physical condition and equipment. From Cachora (2,900 m) is necessary to descend to the Apurimac River (1,530 m) to camp. The second day he gets up to 3.085 m.s.n.m. altitude, where the complex is located. To return, use the same path.
Main sites

The spectacular archeological site of Choquequirao is located in an area of low mountains or jungle at the northwest of the Apurimac canyon, is composed of nine sectors, most notably the political and religious center, the source system of aqueducts and canals and is characterized by abundant greenery, tropical climate and diverse flora and fauna species. Certainly Visit Choquequirao is an indescribable experience! Well worth it.
* The residential sector and the terraces
The residential area is located on the descending portion, while the flanks of the mountains contain the terraces of cultivation. Some irrigation canals were used permanently, while others were temporary. Also include a group of familiar houses called Piquiwasi.
* The ceremonial sector
The ceremonial area is located around the main square; which was dedicated to the worship of the gods of the mountain, the river and other systems of nature; in addition there are two level temples and buildings as the Sunturwasi built for several purposes and collective services.
Flora & Fauna

The impressive citadel of Choquequirao, count with a variety of plants and vegetations around its construction, and with an amazing wildlife that you will be able to appreciate; from the magnificent flight of the condor until see very close the spectacled bear and the most diversity of colorful orchids along this exciting trip.
Tours

-Is highly recommended be in a good physical condition.
-Drink lot of water (bottle or boiled water preferably)
– Drink Coca tea that helps you to avoid the altitude sickness
– Be careful what you eat. (Food poisoning could happen).
– is advisable to eat more fruit and avoid greasy food.
– Bringing some useful medicines for precaution
– Do a medical examination or consult your doctor for a check up, before your trip.
– If you suffer a heart disease or high blood pressure we advised you not to travel.
Security & Safe

-Get a travel Insurance.
– Dot not intent to do the trek or the climbing during rainy season (December to march) could be really dangerous.
– Do the trip with a professional guide (you can get lost or go for risky ways without know it)
– Do not try to do reckless acts (May even cause you death)
-Count with the necessary equipment and measures in order to avoid any inconvenient during the trip.
– Be alert and Hide well your personal belongings (in case any robbery)
For the Trip

– Do not forget you original passport.
– Is recommended to take plenty of fluids and rehydration salts along the trip.
– Bring some spare batteries for your cameras and lanterns there is not electricity.
– Carry with a raincoat, hiking shoes, sun block, insect repellent and a hat.
– Best time to visit is during dry season (May to November)
– The necessary equipment and sleeping bags for camping (The travel agency can provide you if you require it).
– Swimsuit (In case you go to the hot springs)
– Be prepared for all kind of climates (clothes)
– Bring your own snacks as: chocolates, cereal bars, cookies, etc