HALF DAY TOUR TO HUACAS OF LIMA

In the ancient Peru, a Huaca could either be a river, a tree or a mountain to whom magical powers were conferred in the belief that there dwelled some divinity or ancestor. In the area of the coast, that designation was specifically used to name some scaled pyramids.

WOULD YOU LIKE TO BOOK THIS TOUR ? ASK FOR AVAILABILITY

In the heart of the district of San Isidro stands the archaeological complex of Huallamarca. Hualla in the quechua tongue means “uneven” and marca stands for “village”, because in its first times this complex presented a structure sustained over spiraled ramps. In the year of 1999, several pieces of pottery were unearthed, possibly indicating a near-by burial of some important character. An aspect that is common to almost all the important Huacas of Lima is that there are many young archaeologists still working on them, along with some non professional people that voluntarily offer their time and efforts. That is the case of the Huaca Pucllana, nowadays a Historical and Cultural Park, located in the District of Miraflores. This complex was the ceremonial and administrative centre of the Lima culture (around 400 A.D.) which held the control of the valley. The evidences at hand point out that many activities of religious cult, rites and sacrifices to worship their gods took place here. It is also possible that the residences of the governing priests were located in this place. The Pucllana Historical Park includes a museum and areas of research, preservation, restoration and cultural promotion, the latter with the task of motivating the community, starting from childhood, to create a conscience of respect and pride for their natural and archaeological patrimony. 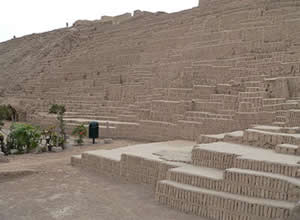 Is a great adobe and clay pyramid located in the Miraflores district of central Lima, Peru, built from seven staggering platforms. It takes its name from the Quechua word “pucllay,” meaning “game,” which in its entirety can be translated as “a place for ritual games.” It served as an important ceremonial and administrative center for the advancement of the Lima Culture, a society which developed in the Peruvian Central Coast between the years of 200 AD and 700 AD.
This Huaca was an administrative and ceremonial centre to the inhabitants of the valley of Rímac, during the Intermedio Temprano and until the early Horizonte Medio (5th to 8th centuries A.D.)
The main building of this complex is 500 meters long, more than 100 meters wide and 22 meters high. It is a solid truncated pyramid, entirely built over a base of stuffed and compressed soil and small adobe bricks. Moreover, the complex is surrounded by a number of precincts of lesser size but altogether notable: rooms, galleries, patios and ramps, generally richly pasted in mud and, in some cases, with traces of yellow paint. 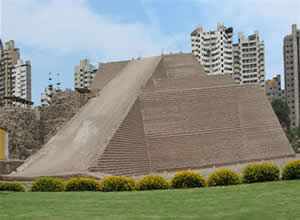 This important archaeological compound, only a little smaller than Pucllana: the Huaca Huallamarca or Pan de Azúcar (Sugar Bread), an adobe scaled pyramid with an impressive access ramp.
A pyramidal shaped Ceremonial Centre of pre-Inca times contains a museum that exhibits artifacts that were found in the site.
Apparently, Huallamarca was a ceremonial centre whose access was possibly restricted to a religious elite, in view of the fact that the uncovered floors show little wear from use. A long sequence of employment and abandonment of this Huaca reveals the different ways in which the funerary practices changed through time.
During the historical period called the Intermedio Temprano (Early Intermediate), the dead were buried laying on their back on mattresses of reeds Towards the 6th century A.D. the corpses were put in a flexed way, giving them a fetal position and wrapped in fine fabrics. And during the last stages of the Horizonte Medio (epochs 3 and 4), the dead were wrapped in fardos or bundles with a false head above, a sort of mask made of painted fabric or wood.

NOT INCLUDED IN THE FEE
International and domestic airfares, accommodations, alcoholic and non-alcoholic beverages or bottled water, snacks, insurance of any kind, phone calls, radio calls or messages, reconfirmation of flights and items of personal nature. HUACA PUCLLANA
HUACA HUALLAMARCA