In the afternoon (1.45pm approx) we will depart on a guided city tour, where visitors have the opportunity to visit 6 places.
Get ready, then, to dive into the mystical and amazing world of the Incas and be witness of the energy that emerges from these magical places.
The first is the Cathedral, whose foundation stone was laid on site in 1560. This marvel of religious art has approximately 300 paintings of the Cusco School, among many other expressions of art.
Then visit the temple of “Koricancha” (Temple of the Sun), now the Convent of Santo Domingo, a place that houses inside one of the most important religious center of the Inca period. This archaeological site is located in the heart of the city of Cusco (Cuzco), only 4 blocks from the Plaza de Armas.
Then we moves to the outskirts of the city to visit in the first place, the magnificent Sacsayhuaman can be variously translated as ‘speckled falcon’ or ‘speckled head’. The last interpretation refers to the belief that the city of Cusco was set out in the form of a puma whose head was the hill of Sacsayhuaman. The origins are uncertain but the fortress is generally attributed to the period of Inca Pachacuti, the man who essentially founded the Inca empire.
Here is made the famous Inti Raymi or Festival of the Sun on June 24 of each year.
Just 200 meters from Sacsayhuaman is our next destination Q’enqo (Labyrinth or Zigzag) This is one of the finest examples of a rock artfully carved in situ showing complex patterns of steps, seats, geometric reliefs and a puma design. It was religious center dedicated to the worship of the Earth and, according to some theories, funerary rituals. Our next visit is Puca Pucara (Red Fort) was used as a center for military use and control, as well as a place where travelers may have lodged here with their goods and animals before entering or leaving Cusco.
Our last destination, is Tambomachay (Cavern Lodge) have played an important religious function linked to water and land regeneration. It is estimated that was built around 1500 AD. The site covers approximately one acre and the material used for its construction was limestone with polygonal style gear. It has the following sectors: industry sources at various levels with terraces at the base is a source of great size has two important channels ritual.
At the end, return to Cusco arriving at 6:30pm approximately at the main plaza. 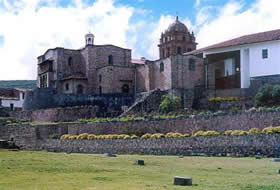 END OF OUR SERVICES
INCLUDED:
Pick up at your hotel
Entrance to all the visited sites
English speaking guide
Group of 15 people

NOT INCLUDED:
International or domestic airfares
Lodging
Further information on