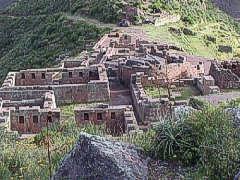 Archaeological Park of Pisac
On a mountain lies the archaeological site of Pisac, made up of numerous districts and various places including the main one is known as Intihuatana, admired for their fine finish to their premises. Also of interest is the pre-Hispanic cemetery, the largest found in this part of the continent.
The Pisac Inca constructions are remarkable for the huge platforms or terraces that surround the mountain, its polished stone structures, fully assembled, are surrounded by watchtowers and observation points.
Main places in Pisac

The wall. Gather five doors, located in the eastern part of the archaeological complex. The only one who has called Amaru Punku lintel, which means “Gate of Serpents.”
The tunnels. Are some chincanas discovered in the archaeological area, you can have different directions, one going towards the city of Cusco and one on the citadel of Machu Picchu, the latter passing through Ollantaytambo.
The Inca Bridge. Deposits: are six colcas having equal size, these may have served as reservoirs of the Incas, where they kept all the harvested products.
The Inca cemetery. This is located in front of the archaeological complex, being able to see the caves that were once the tombs of the nobles of the empire.
The “City” of the Towers. We can also say that Pisac is known as the “City of Towers”, because it has more than twenty towers built in the projecting parts of the mountain.
The Enchanted Ñusta. It is a rock shaped like an Andean woman carrying a child, this statue of rock may be found in one of the curves reaching Pisaq (on the road Cusco – Pisac)
Tiyanacuy. It is a small neighborhood located in the lower part of the city. Here you can find a perfect seat for two, carved in stone.
Calla House. This is a rustic set of buildings located in the irregular outline of the mountain top. Is difficult to access because we have to overcome some dangerous cliffs.
Pisaca. Set of rectangular buildings located southeast of, because their walls are considered the most perfect of the Inca civilization, also provides a spectacular view to the town and the rest of the valley.

The Archaeological Park has a site museum where exhibits the main pieces found in the main sites of Pisac.