A diverse period – and one marked by intense development in almost every field – the Classical Era (200-1100 AD) saw the emergence of numerous distinct cultures, both on the coast and in the sierra. The best documented, though not necessarily the most powerful, are the Moche and Nasca cultures (both probably descendants of the coastal Paracas culture) and the Tiahuanuco , all forebears of the better-known Incas. In recent years, though, archeological discoveries in the Lambayeque Valley on the north coast have revealed important ceremonial centres – particularly the Sicán culture’s massive sacred complex of truncated pyramids at Batan Grande . Contemporaneous with the Moche, to the south, there is also strong evidence that the Sicán revered the same demonic spirit or god, named Ai-Apaec in the Moche language, the “Winged Decapitator” who kept the world of human life and death in order. Ai-Apaec is also associated with the veritable treasure-trove found in the royal tombs at Sipán , just south of Lambayeque, and those of the Vicus culture, to the north, near Piura. This appears to have been the god that kept the human world and reality of life and death in order.

The Moche culture has left the fullest evidence of its social and domestic life, all aspects of which, including its work and religion, are vividly represented in highly realistic pottery. The first real urban culture in Peru, its members maintained a firm hierarchy, an elite group combining both secular and sacred power. Ordinary people cultivated land around clusters of dwelling sites, dominated by sacred pyramids – man-made huacas dedicated to the gods. The key to the elite’s position was probably their organization of large irrigation projects, essential to the survival of these relatively large population centres in the arid desert of the north coast. In the Moche region, nature and the world of the ancestors seem the dominant elements; occasional human sacrifices were offered and trophy heads were captured in battle. The peak of their influence came around 500 to 600 AD, with cultural and military control of the coast from Piura in the north to the Nepena Valley in the south.

More or less contemporaneous with the Moche, the Nazca culture bloomed for several hundred years on the south coast. The Nazca are thought to be responsible for the astonishing lines and drawings etched into the Pampa de San José, though little is known for certain about their society or general way of life. The Nazca did, however, build an impressive temple complex in the desert at Cahuachi , and their burial sites have turned up thousands of beautiful ceramics whose abstract designs can be compared only to the quality and content of earlier Paracas textiles.

Named after its sacred centre on the shore of Lake Titicaca, the Tiahuanuco culture developed at much the same time as the Moche – with which, initially at least, it peacefully coexisted. Tiahuanuco textiles and pottery spread along the desert, modifying both Mochica and Nazca styles and bending them into more sophisticated shapes and abstract patterns. The main emphasis in Tiahuanuco pottery and stonework was on symbolic elements featuring condors, pumas and snakes – more than likely the culture’s main gods, representing their respective spheres of the sky, earth and underworld. In this there seem obvious echoes of the deified natural phenomena of the earlier Chavín cult.
Although initially peaceable, the Tiahuanuco influence is associated in its decadent phase with militarism . Originating either at Huari, in the sierra near Ayacucho, or on the central coast, this forceful tendency extended from 650 to 1100 AD and was dominated by what today is called the Huari-Tiahuanuco culture . The ruins at Huari cover some eight square kilometres and include high-walled enclosures of field stones laid and plastered with mud, decorated only by a few stone statues along Tiahuanuco lines. Whether or not this was the actual inspirational centre, by around 1000 AD Huari-Tiahuanuco features were dominant in the art forms over virtually all of Peru.
In the north the Valley of the Pyramids, or Túcume , was another major ceremonial centre, covering more than 200 hectares. Initially begun by the Sicán culture, who started building here around 1100 AD after abandoning their earlier centre at Batan Grande, it reached its peak in the thirteenth and early fourteenth centuries, during the power vacuum in the Moche valley, between the decline of the Moche and the rise of the Chimu. Archeologists believe that this must have been a time of abundance and population growth for this desert region, with optimum weather conditions for agriculture, the improvement of irrigation techniques, and plentiful seafood.

An increasing prevalence of intertribal warfare characterized the ultimate centuries of this era, culminating in the erection of defensive forts, a multiplication of ceremonial sites (including over 60 large pyramids in the Lima area), and, eventually, the uprooting of Huari-Tiahuanuco influence on the coast by the emergence of three youthful mini-empires – the Chimu , the Cuismancu and the Chincha . In the mountains its influence mysteriously disappeared to pave the way for the separate growth of relatively large tribal units such as the Colla (around Titicaca), the Inca (around Cusco) and the Chanca (near Ayacucho).

Partly for defensive reasons, this period of isolated development sparked off a city-building urge which became almost compulsive by the Imperial Era in the twelfth century. The most spectacular urban complex was Chan Chan (near modern Trujillo), built by the Chimu on the side of the river opposite to earlier Mochica temples but indicating a much greater sophistication in social control, the internal structure of the culture’s clan-based society reflected in the complex’s intricate layout. By now, with a working knowledge of bronze manufacture, the Chimu spread their domain from Chan Chan to Tumbes in the north and Paramonga in the south – dominating nearly half the Peruvian coastline. To the south they were bounded by the Cuismancu , less powerful, though capable of building similar citadels (such as Cajamarquilla near Lima) and of comparable attainment in craft industries. Further down the coastline, the Chincha – known also as the Ica culture – produced fine monuments and administrative centres in the Chincha and Pisco valleys, too. The lower rainfall on the southern coast, however, didn’t permit the Chincha State – or (to an extent) the Cuismancu – to create urban complexes anything near the size of Chan Chan. 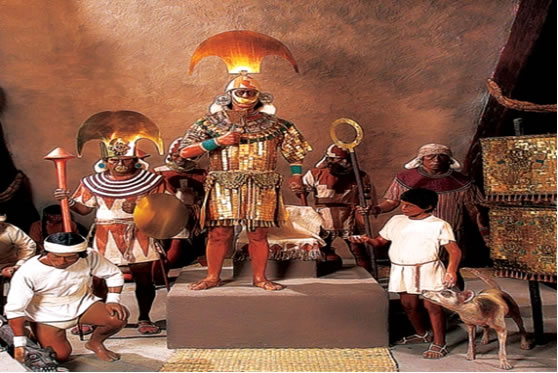