From around 1200 BC to 200 AD – the Formative Era – agriculture and village life became established. Ceramics were invented, and a slow disintegration of regional isolation began. This last factor was due mainly to the widespread dispersal of a religious movement, the Chavín Cult . Remarkable in that it seems to have spread without the use of military force, the cult was based on a conceptualization of nature spirits, and an all-powerful feline creator god. This widespread feline image rapidly exerted its influence over the northern half of Peru and initiated a period of inter-relations between fertile basins in the Andes and some of the coastal valleys. How and where the cult originated is uncertain, though it seems probable that it began in the eastern jungles, possibly spreading to the Andes (and eventually the coast) along the upper Río Marañon. There may well have been a significant movement of people and trade goods between these areas and the rainforest regions, too, as evidenced by the many jungle-bird feathers incorporated into capes and headdresses found on the coast. More recent theories, however, suggest that the flow may have been in the opposite direction and that it started on the coast. The stone and adobe temples, for instance, in the Sechin area, pre-date the Chavín era yet seem to be culturally linked.
The Chavín Cult was responsible for excellent progress in the work of stone carving and metallurgy (copper, gold and silver) and, significantly, for a ubiquity of temples and pyramids which grew up as cultural centres where the gods could be worshipped. The most important known centre was the temple complex at Chavín de Huantar in Ancash, though a similar one was built at Kotosh near Huánuco; its influence seems to have spread over the northern highlands and coast from Chiclayo down as far as the Paracas Peninsula (where it had a particularly strong impact). There were immense local variations in the expressions of the Chavín Cult: elaborate metallurgy in the far north; adobe buildings on stone platforms in the river valleys; excellent ceramics from Chicama ; and the extravagant stone engravings from Chavín itself. In the mountains life must have been very hard, based on subsistence agriculture and pilgrimages to the sacred shrines – most of which probably originated around ideas formulated by an emergent caste of powerful priest-chiefs. On the coast there was an extra resource – seafood – to augment the meagre agricultural yields.
Towards the end of the Chavín phase , an experimental period saw new centres attempting to establish themselves as independent powers with their own personalities. This gave birth to Gallinazo settlements in the Viru Valley; the Paracas culture on the south coast (with its beautiful and highly advanced textile technology based around a cult of the dead); and the early years of Tiahuanaco development in the Lake Titicaca region. These three cultural upsurges laid the necessary foundations for the flourishing civilizations of the subsequent Classical Era. 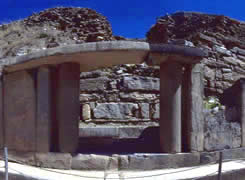