THE TEMPLE OF THE SUN 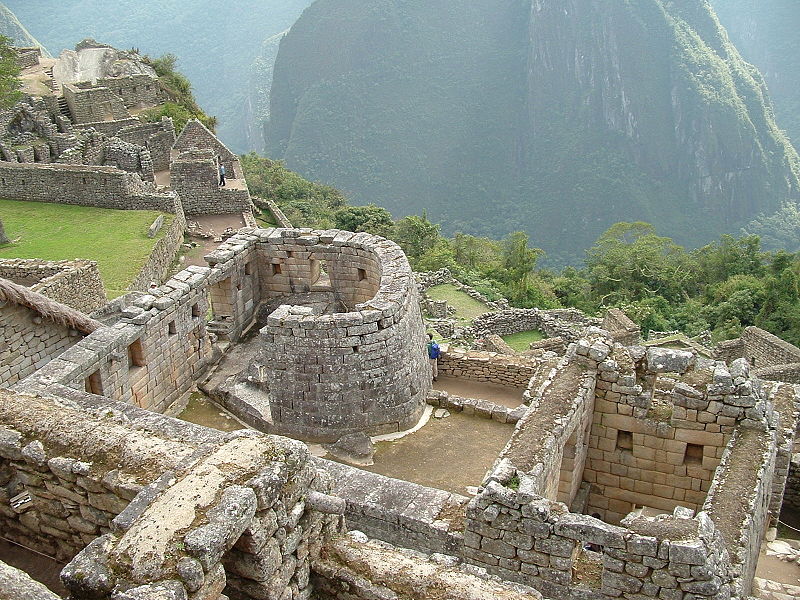 Besides being the headquarters of the religious ceremonies, The Temple of the Sun was also an important scientific center. With a Semi-circular building located on the lower part of a hill, this archaeological site has one of the most beautiful Inca constructions inside a cave, where they joined perfectly each finely polished stones, leaving an inch between its joints.
Originally, the Temple of the Sun was an extremely protected enclosure. Only had access the Inca priests due to the sanctity of the soil; for the rest of the population, the religious rites were officiated at the public square. Also the entrance to the Temple had a double wooden door secured with a safety mechanism stone ring, which prevented the passage of onlookers when it was officiated the rite for the Sun God. 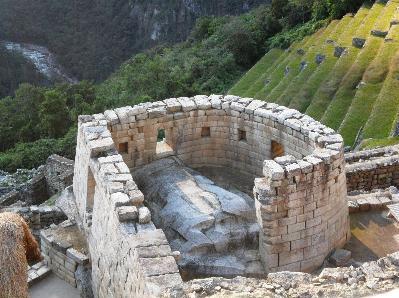 This is the finest, largest and best distributed of Machu Picchu. The Sun Temple is located in the urban sector and it is accessed by a double jamb cover, which was closed; there are remains of a security mechanism. The exact location of the citadel was chosen to get place it at the highest altitude possible, in order to turn get to watch the sky more closely. The Inca civilization considered a position closer to the sun would allow them a better and more appropriate placement as well as for his astronomical studies and to their religious rituals.
The main building is known as the Tower, finely carved blocks. Here is where was set the center of studies and religious practices and where were remains of a gnomonic device for measuring solar time. The Tower is built on a large rock below which there is a small cave that was completely lined with fine masonry. It was supposedly a mausoleum and rested in large niches mummies. It was used for ceremonies related to the June solstice. The tower shows a semicircular impressive architectural design, which its flat segment contains the Serpent Gate, while the circular wall shows two windows with strange trapezoidal shape. One of the windows shows signs of having been encrusted ornaments that were pulled at some point in the history of Machu Picchu, destroying part of its structure. In addition there are traces of a large fire at the site.
Under the large rock mass on which is the tower, it was found the entrance to a small underground cave which has excellent construction. This camera is behind where one can appreciate an extremely delicate work of masonry, for all chamber walls are completely covered with carved stone, so maintaining the theory that it was designed as crypt to house the mummified corpses several members of the highest aristocracy of the Inca civilization. In the western part near the temple, was built a rectangular courtyard where you can see nine cavities that may have been intended as graves because of its similarity to other groups of graves.
Through one of the cameras you can access another building which is believed to have been intended as a room for the service, because it has a sewer or drainage system, a room designed like a shelter intended for indigenous livestock in the area, the set includes a pen for camelids and a private terrace overlooking the east side of the city.
In the center of the temple there is a carved stone that was used to perform the several ceremonies honoring the sun.
More information:
Best time to visit Machu Picchu
Altitude of Machu Picchu
Hiking Machu Picchu