Along the years the history of Machu Picchu continues fascinating a many people, who want to know more about the Inca Empire and its Culture.

The citadel of Machu Picchu is one of the world’s archaeological jewels and the most important tourist destination of Peru. Since being discovered by American archaeologist Hiram Bingham in 1911 has continued to surprise the world.

Archaeologists believe it was built during the fifteenth century by the Incas, but its main purpose is still a mystery. Is told that was populated by a large number of inhabitants, but only by nobles, priests and “aqllas” (virgins of the sun). There was also a population of peasants who worked the fields but did not live inside the citadel.

The city is divided into 3 areas: 2-populated areas and the agricultural sector, which is a vast system of terraces and irrigation canals. The urban sector was divided into two districts, one of them are the most important temples like the Sun, and the actual room. In another neighborhood are located the homes of the nobles and the convent of the “virgins of the sun.” Between the two neighborhoods is a huge open as a square. The surroundings are stunning, the citadel is built on top of a hill surrounded by the Urubamba river and a mountain range, and it seems the center of a ring of mountains.

Perhaps the biggest attraction of Machu Picchu is the level of technological development achieved by the builders in architecture and stonework. The joints of the stones in some environments are so narrow that even a pin could be inserted. The stone most significant is the “Intihuatana” or solar calendar, which allowed the Incas to know precisely the seasons and the weather throughout the year. However, many found in Machu Picchu more than history and old technologies, but also energy and peace that surrounds all who come and visit so mysterious place.
The construction of Machu Picchu is the time that the small Inca dominion began to grow. According to archaeologists, this area was fought the last battle that defined the victory over the Chanca, covering prestigious victory and gave the power to Inca Pachacutec.

Pachacutec was the first Inca to expand beyond the valley of Cusco after his epic victory over the Chanca. It was conducted by the expansion of Tahuantinsuyo and is recognized as the “constructor” of Cusco. This was one of his greatest works.
The origin of Machu Picchu is attributed with some certainty to Pachacutec, embattled president, who was characterized by territorial gains, and the development of religion and spirituality. From today there is archaeological studies support the theory that it was a royal hacienda destined for the worship of the gods and a challenge to the ruling skills builder.

Built as a refuge for the elite of Inca aristocracy, the fortress was located on the eastern slopes of the Vilcanota mountain range, about 80 km from Cusco, the capital of the empire. Its strategic location was chosen with admirable success. Surrounded by steep cliffs and secluded from the sight of strangers in a tangled forest, the citadel of Machu Picchu had the quality of having only one narrow entrance, allowing, if a surprise attack, be defended by a handful of warriors.

Occupied by at least three generations of Incas, Machu Picchu was abandoned in a sudden and mysterious decision. The most likely theories explain his disappearance from historical memory on the grounds that Machu Picchu was a place unknown to the lower castes and forbidden routes for anyone not part of the small circle of the Inca.

On July 24, 1911 is known as the date of its discovery, an architectural treasure had been hidden for more than four centuries under the lush countryside of the Urubamba canyon. This was found by controversial an American explorer, Hiram Bingham, who led that this impressive Sanctuary was showed to the entire world. 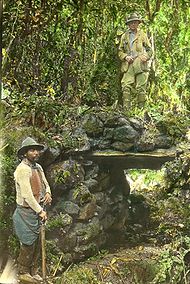