At the moment of you travel to Peru as biodiversity country you will notice that has a very diverse variety of climates; its vast geography justifies its 28 types of weather. In general the climate is temperate, without significant rainfall in the winter nor too hot in the summer, allowing tourism in any season. This is the case, the capital, Lima, where summer temperatures average 25 ° C and winter is characterized by gray, humid days and cloudy, with temperatures between 12 º C and 15 ° C.

by other hand, The Peruvian Highlands, located throughout the length of the country north – south along the coast begins and ends in the Amazon rainforest, temperatures are on the order of -7 C to 26 C, usually the cities are more than 3000 mts. altitude and take-off near the 4000 meters., this is a very dry climate slightly varying their temperatures during the seasons, but rain between the months of December to March are fairly continuous. There are mountain passes over 4800 m., where cars and people suffer from lack of oxygen (hypoxia) or the most common called “Soroche”.

When you decide to travel to Cusco between the months from April to October its weather is very comfortable, warm and dry. The temperature in this season has an average ranging between 5.0 ° and 20 ° Celsius.

The rainy season begins in November and lasts until March, at the beginning of the season, the rain is light and as the season between the months of January and March, the rain becomes more intense.

There is some uniformity in temperature between summer and winter. Normally in winter is cold at night and during the early morning hours the temperature increases considerably until noon. On sunny days the temperature reaches 20 ° C.

We recommend to tourists, bring warm clothes and clothes for the rainy season.

Cusco is under the influence of macro-climate of large air masses from the south eastern jungle, as the winds of Peruvian-Bolivian Altiplano are rather cold and dry, like those from Patagonia, entering by the south east and generally involve larger-scale climate events. On the other hand, local winds generated at the valleys and at Cusco plains aim at distributing the heat and humidity throughout the day.

The average annual temperature fluctuates between 10.3 ° C and 13 ° C (50.54 ° and 52.34 ° Fahrenheit), but these temperatures fluctuate according to the area.
Diversity of climates in the region of Cusco:

The Apurimac River basin has an average temperature between 17 º and 18 º. With a maximum temperature of 32 degrees and a low of 4.4 °

The valleys (central area) has a varied climate and it has humid and dry with an average temperature range between 11 º and 16 º, at times of maximum temperature increases to 29 ° and can reach down to 7 ° and -4 °.

The climate is also humid and dry at high altitude (3,800 m). Here the temperature reaches an average according to the altitude. Maximum temperatures reach 10 degrees and minimum temperatures below 0 º. So we advise you to keep you warm and never underestimate the cold in the city of Cusco.

Cusco is a city located at 3400 meters altitude above sea level. The climate has two seasons: The rainy season lasts from November to May and the Dry Season lasts from April to October.

In Cusco, we find a variety of weather stations:

Warm Climates: which can be dried and / or humid. Dry climates are given in the Yungas low Apurimac River Basin, central and southwestern department.

Temperate Climates: which can also be wet or dry and are given in the central area of the department, then in areas closer to the east, is more humid and finally near to the west the climate is drier.

Cold Climates: can also be wet or dry and correspond to the higher altitudes, above 3800 meters.

For that reason, it is always recommended to bring or carry with you warm coat for the cold nights and a waterproof jackets, in case you get surprised by any rain.. The rains are usually torrential and almost always fall in the evenings, you better be prepared. 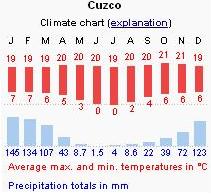