SAQSAYWAMAN
Located 2km from the city. Together with the city of Cusco, this monumental complex is considered the first of the new seven wonders of the world. This huge construction was planned and built by Andean Man. The Incas called it the House of the Sun and the Spaniards called it a fortress because of its zig-zag shape and the 1536 revolution. The construction, which is made up of three platforms one on top of the other, was one of the most important religious complexes of its time.

The mestizo chronicler  Garcilaso de la Vega ( Gomez Suarez Figueroa Was his original nanme )  described in his book “The Royal Commentaries” every detail of this sacred spot, its walls, rooms, towers, doors and canals, which have sparked great interest and admiration from visitors and residents alike. The enormous boulders that form part of the construction were put together perfectly without using mortar. The heaviest weighs up to 125 tons. Archaeologists are currently excavating and have discovered water fountains, canals and rooms. In a nearby flat area, every June 24 local inhabitants hold the Festival of the Sun, or Ind Raymi. Saqsaywaman witnessed important historic events.
More information >>> 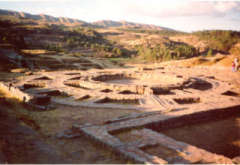