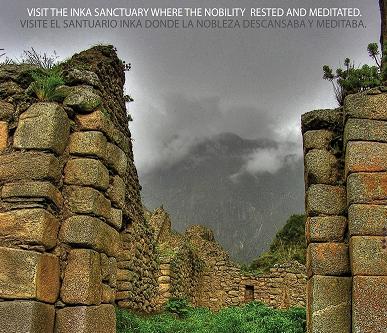 COME AND SEE THE INCA SHRINE, WHERE THE NOBILITY RESTED AND MEDITATED

Sanctuary Garden is a camp that runs through parts of the network of Inca trails within the Historic Sanctuary of Machu Picchu, within an area bounded by 10 peaks, which represented a sacred area to the Incas, as are 12 archeological sites and even the not yet very famous stone of 54 angles, located on the banks of the Urubamba and Cusichaca in the region of Cusco, Urubamba, Ollantaytambo and Machu Picchu District.
All this group of monuments corresponds to an area used exclusively for the upper classes of the Inca Empire and features both available as correspond to a sanctuary Inca temples, large stores, access control centers, infrastructure, irrigation, terracing for cultivation and agricultural experimentation, temples, observatories and places for meditation and healing of the Inca nobility.
However, the National Institute of Culture increasingly discover more archaeological sites, as a large terraces beside Q’ente Wayna, a shrine cavern and cave paintings, canals, reservoirs, a tunnel to cross the mountain, tombs and more .

ARCHAEOLOGICAL GROUP
All groups listed below were part of a complex restricted to the use of the elites of the empire for purposes of purification, meditation and relaxation. Many terraces are used for management purposes and adaptation of plants and planting flowers. It was also a source of medicinal plants, aromatic resins for collecting, birds and feathers for ornaments, and a place of hunting and fishing.

MACHUQ’ENTE “Old Hummingbird”
Extensive platforms that delineate the silhouette of this small bird to bordering the Vilcanota River at an altitude of 2350 MSNM.
This place is characterized by a group of platform with double slide walls that cover an area of 1,000 meters of length by 250 meters of width. The resources that offer the ground were used at the maximum; the platforms have a geometric disposition and are visible from any point of the valley. Also there is a ceremonial rock (ushnu) near to the Q’entemayo River.

WAYNAQ’ÈNTE “Young Hummingbird”
It is located at 2.5 km away at the Northwest of Machuq’ente and is one of the most beautiful complexes of the sanctuary. They were connected by an Inca trail, the same that has all the civil works, drains for pluvial waters and walls of defense.
It is at 2,550 MSNM, has 11 rooms divided in special groups and is over the middle part of Q’ente hill.
It is said that had a ceremonial use as Patallaqta.
Stands out his double gate of ceremonial access, finely carved, which demonstrates the presence of nobility and people dedicate to the cult.
Also stands out the ceremonial saloon, the platforms located in the back of the Q’ente Hill and the wide view that dominates the entire valley.

PATALLAQTA “Pueblo en lo Alto”
Known also as Q’entemarka (Place of the Hummingbird), great archeological complex at 3 Km. of Q’oriwayrachina. Have more than 100 buildings organized by blocks (kanchas), squares, streets, and alleys. These edifications are built with rustic stone material joined with mud and with the presence of carved stone.
Based on investigations made on a recent expedition, this structure may have formed part of the global complex of Llactapata and could also been a Qolqa (storage) for the residential/administrative sectors located below.

PULPITUTYOQ
Is the name of an Inca altar located in the oriental side of Patallaqta at 2500 MSNM. We can enter to this place by a round stair. Inside, at the middle, is an enormous rock that has two enclosures at the top. There are others rooms with rectangular columns and stairs.

Q’ORIHUAYRACHINA “Where the gold is spread”
This archeological complex is at 88 km of the railroad Cusco Machu Picchu at 2,450 MSNM. It is constituted by an enormous rock that emerges laterally of the oriental chain of the Vilcanota River and ends with a vertical flank of great high. It is a natural edge by where the waters of the Vilcanota River pass by.
It is assumed that works as an emission center for signs and communication. One of the principal attractive is a stair of stone that goes to the superior part, where a based circular wall in the same rock exists; those that they are rest of an almost cylindrical tower. The inferior part has a ceremonial type access to the Vilcanota River, besides it has walls and stirrups of the Inca Bridge.

WILLKARAQAY
Strategic archeological place located in the Valley of Cusichaca at 2790 MSNM with the presence of rooms, blocks and alleys. Built over a rock spur since they can dominate great part of the area. Have more than 30 rooms located with singular geometry. The entire complex is locked up with a perimetric ovoid wall with a length of more than 120 meters.
It has a semicircular tower near the mountain tip, which dominates all the west side of the valley, through 6 windows, twin enclosures, and an inner patio, all of rural construction. According to the understood ones it was a military base.

SALAPUNKU “Sun Gate”
Constituted by walls similar to those of Sacsayhuaman, according to the understood ones it is a replica to the fortress, with an altitude of 2600 MSN. It would have represented a sort of fortress against attacks or possible invasions, besides representing the door of control of the valley.

Q’ANABAMBA. “Green Prairie”
It is located at 85 km of the railroad. It is formed by 13 rooms of rectangular base, being the twin ends united by a dividing wall, the one of the extreme west also is in perpendicular form the other between third and the quarter has that same disposition.

WAYRACPUNKU “Wind Gate”
It is located at 2605 MSNM. It is formed by a room of 19 meters. The front wall is slightly curved and has 6 windows. The back wall is at the level of the ground without being able to identify the accesses. It was built with formed blocks and mud mortar having revoked its walls with mud.

PINCHAUNUYUQ
Archeological group located at 87 km of the railroad at 2480 MSNM. It is at 20 meters of the Vilcanota River. There are hydraulic works that channels water of the heights. The main attractive is a sold rock with capricious workings, straight edges, protuberances, seats and moldings.

TORONTOY
Archeological complex characterized by having edifications in the central part with rooms that have pronounce ceilings constructed thus to avoid pluvial filtrations. This construction belongs to the delayed or classic imperial time. It has large windows to way of balconies, with niches in the lateral walls. This place is where Bingham spent the night before arriving on the following day to Machu Picchu.
The other attractiveness that is the interior of the main hall is the presence of a block of stone that serves as wall and windows and that have 40 angles, the same is united with other 28 stones.
Please make a choice: