Unlike those in Mesoamerica, the earliest major ruins in the Central Andean Area date from before the discovery of pottery.
Pre-Ceramic Period  In the Chicama Valley of the northern Peruvian coast at Huaca Prieta, monumental ceremonial mounds were built about 2500BC. Highly skilled cotton weaving has been found at this site as well as gourds carved with stylized geometric motifs. Another Pre-Ceramic site on the northern coast is Las Haldas, where perhaps the first true pyramids and platform temples in the Americas were constructed of earth about 1800BC. El Paraido, or Chuquintanta, on the central Peruvian coast, is the region’s largest excavated Pre-Ceramic site. Various residential complexes of clay and stone were built by piling rooms and terraces onto one another, as in the Pueblo towns in the southwestern United States. Another important Pre-Ceramic site is Kotosh in the northern highlands of Peru. At Kotosh, terraced temples were made of fieldstone set in earth and decorated with clay reliefs of crossed hands.
Pre-Classic Period  Two important cultures developed in Peru in the Pre-Classic period, Chavín de Huántar and Paracas.

Between about 1200 and 200BC, in the northern Peruvian highland ceremonial center of Chavín de Huántar, a civilization flourished that in many ways paralleled the contemporary Olmec civilization of Mesoamerica. Both were major early civilizations in their archaeological areas, and both used feline images in their sacred iconography. It appears that Chavín artistic influence was spread not by military but by religious and intellectual efforts. From Ecuador to southern coastal Peru, evidence remains of Chavín artistic and iconographic influence.
Chavín de Huántar is composed of a series of platforms and temples with corbel vaults in some of the corridors. The finest stone sculpture in the Central Andean Area is found at Chavín de Huántar or at Chavín-related sites such as Cerro Blanco and Cerro Sechin. Unlike the Olmec and other Mesoamericans, however, the Chavín and later Peruvian civilizations created very little freestanding stone sculpture or even clay figurines. Chavín shallow-relief carving achieved its expressive height in the stylized rectilinear design of the stela called the Raimondi Stone.
Probably originating in northern Peru, the stirrup-spout vessel—a closed pot having a hollow U-shaped handle surmounted by a tubular spout—was the most characteristic Chavín ceramic shape. Resembling Olmec ceramics, fine Chavín pottery was produced at outposts rather than at the principal ceremonial center. In northern Peruvian coastal valleys at Cupisnique, Chongoyape, and Tembladera, highly accomplished effigy pots were made with abstract and realistic designs.
Metalworking developed and the Chavín excelled at making hammered gold, or repoussé, body ornaments. Characteristic of the metalwork of the Chavín are cutout decorative plaques that were attached to garments, and high cylindrical crowns with mythological reliefs, which were worn by the Chavín nobility.

Another civilization developed from about 1100 to 200BC at Paracas on the southern Peruvian coast. Because of the area’s extreme aridity, Paracas textiles have been perfectly preserved. Buried in desert tombs, mummies were bundled with layers of cloth that was woven or painted with complex designs or elaborately embroidered. Effigy pots were also found in the Paracas necropolis. Many of these show distinct Chavín influence, especially in the use of feline-cult iconography.
Peruvian southern coastal art has always been more influenced by schematized textile designs, rather than by the clay and metal sculpture that promoted the realism of northern Peruvian art. The decoration of Paracas ceramics, therefore, was highly stylized, frequently incised, and brightly polychromed. The vessels themselves were often double spouted and round bottomed, rather than stirrup spouted and flat based like northern coastal pots. 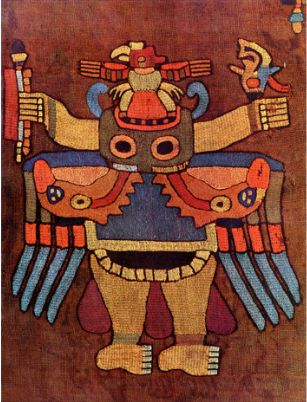 Dominating the Classic period were the Moche and Nazca cultures and the later Tiahuanacu and related Huari cultures.
Moche
Between about 200BC and AD700 a militaristic society flourished on the northern Peruvian coast. Formerly named after its language, Mochica, this civilization is now referred to by the name of its major ceremonial administrative site, Moche.
Centered on two large terraced platform pyramids of sun-baked brick, Moche is one of Peru’s most monumental sites. Although a warrior society, the Moche displayed none of the spartan taste or disdain for luxury that characterized the Mesoamerican Toltec. Moche tombs were filled with some of the most proficient pottery and metalwork of the Central Andean Area.
Moche ceramics, the best known of ancient Peruvian artifacts, are among the finest pre-Columbian accomplishments of sculptural realism and narrative drawing. So-called portrait-head effigy pots are especially notable for realistically depicting human features and portraying emotion. On other Moche pottery the curved vessel walls are decorated with dynamic scenes drawn with delicate stylized lines and showing this people’s religious and military life. The Moche also produced more erotic pottery than any other pre-Columbian civilization. These artifacts are now interpreted as having ceremonial rather than pornographic meaning.
Moche metalwork was more ornate and technologically advanced than that of earlier civilizations. Body ornaments of gold, silver, copper, and alloys were frequently inlaid with turquoise and lapis lazuli. Geometric patterns and mythological motifs, especially the feline deity, were used. 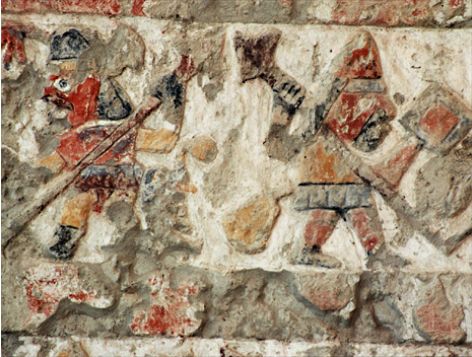 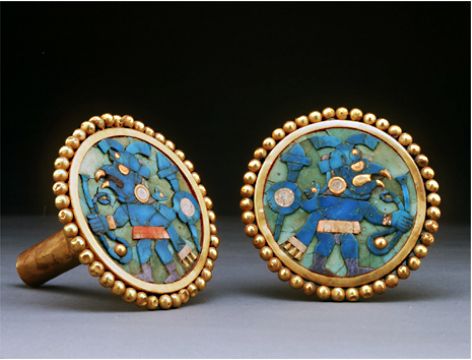 Nazca
The Nazca of Peru’s southern coastal region were roughly contemporary with the Moche. Like their Paracas predecessors, the Nazca produced little architecture and excelled at making textiles and pottery with colorful stylized designs that contrast sharply to the realism and restrained color of northern Peruvian ceramics. Nazca pottery is as exuberantly polychromed as it is boldly designed and drawn. Paracas incising was no longer used, and color was applied before (instead of after) firing. Although both the Moche and the Nazca made pots that combined modeled elements and drawings, the Moche preferred sculptural pottery, and the Nazca, painted.
Among the most enigmatic of all pre-Columbian remains are the Nazca lines. These are drawings in the earth of geometric shapes, animals, birds, and fish that can be fully recognized only from the air. Certainly ceremonial in use, the images recall those painted on Nazca pottery. They were made by removing dark upper-surface stones to reveal a lighter substratum. 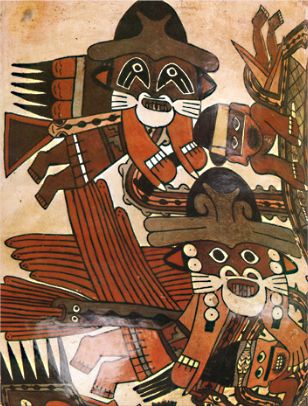 Tiahuanacu
Tiahuanacu is a Bolivian site in the southern Central Andean highlands near Lake Titicaca. Although Tiahuanacu was settled as early as about 200BC, it was between about AD200 and 600 that this urban complex became the center of another major Classic period civilization.
In Tiahuanacu art and architecture the emphasis is on austerity, control, and permanence. Decorative motifs and religious imagery are rigidly stylized. Both buildings and sculpture are characterized by a monumental effect and monolithic appearance. The Gateway of the Sun at Tiahuanacu is cut from a single stone and ornamented with finely executed relief decoration; only 3.7 m (12 ft) high, it appears more monumental because of its design.
Scattered throughout the Tiahuanacu area are pillarlike monolithic statues that reach heights of more than 6 m (more than 20 ft) and are decorated with low-relief detailing. The Tiahuanacu culture was one of the few in the Central Andean Area committed to an extensive use of stone for architecture, sculpture, and ceremonial objects. 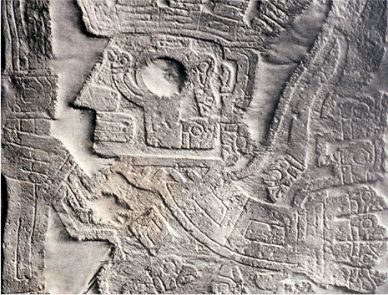 Huari
The Huari (Wari) shared a religion and iconography with the Tiahuanacu, but were socioeconomically separate. Between about 750 and 1000 the Huari Empire put an end to Peruvian regionalism, thereby preparing for the cultural unification of the Inca period.
Like the Moche, the Huari were a warrior society that appreciated fine artistry and design. Coastal Huari cultures (formerly referred to as Coastal Tiahuanacu) produced textiles of the highest quality. Many of the patterns, especially for ponchos, were abstractions of motifs painted on Tiahuanacu pottery. Although less refined than Tiahuanacu ceramics, Huari pottery stressed solid construction, bold design, and a rich use of polychromy.
Post-Classic Period  The Inca were preeminent during the Post-Classic period, rivaled only by the Chimu. 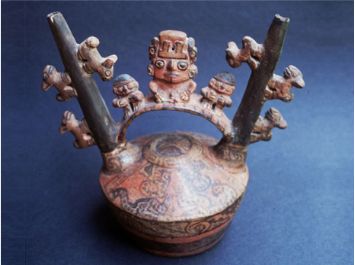 Chimu
Northern Peru was dominated by the Chimu from about 1000 until 1470. Their imperial capital of Chan Chan was constructed of large walled adobe compounds reflecting those of earlier Huari settlements. The largest Andean urban site and a true city, Chan Chan consists of ten major quadrangles, each containing small pyramids, residences, markets, workshops, reservoirs, storehouses, gardens, and cemeteries. The buildings are decorated with geometrically patterned mosaics of adobe bricks or bas-reliefs, molded in clay plaster, of stylized animals, birds, and mythological figures.
Although Chan Chan was not fortified, the Chimu defended their empire by building fortresses on the frontiers. Paramonga, which defended the southern border, is considered a masterpiece of military engineering, as is the fortress of Saccasihuamán above Cusco.
Chimu pottery was primarily mass-produced through the use of molds. Its characteristic black color was achieved through almost smothering the flame, drastically reducing the oxygen in the kiln, during firing. Decoration was usually molded relief, and the surface was polished after firing to give the pot a silverlike sheen.
Metalworkers also mass-produced objects by using molds. Compared with Chimu pottery, however, the metalwork is more distinctive in design and individual in artistic execution.
Textiles were made with the same quality and quantity as other Chimu arts. The featherwork was especially outstanding, and their feathered ponchos were among the most luxurious garments made in the Post-Classic period. 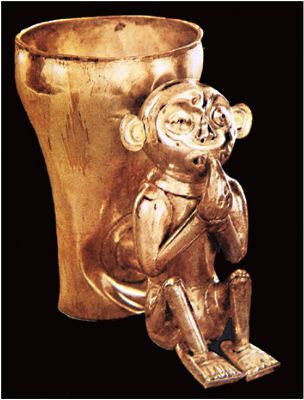 Inca
The Inca, who called themselves Tawantinsuyu, ruled from Cusco an empire extending between Ecuador and Chile. A highland warrior people, the Inca preferred an aesthetic that was formally simple, decoratively sparse, and functional. Because the Inca were the Native Americans that the Spanish conquered, their culture is the Central Andean Area civilization of which most is known; however, as happened with the treasures of their Mesoamerican contemporaries, the Aztecs, many Inca artifacts were destroyed by the Spanish, out of greed for gold and silver or out of Christian militancy.
Highland Inca cities such as Machu Picchu were carefully planned to harmonize with the landscape, both through the use of indigenous materials and through the architectural repetition of surrounding natural forms. Structurally among the most accomplished in the pre-Columbian period, Inca buildings were constructed with carefully shaped, precisely fitted stone masonry that was left undecorated. Trapezoidal doors and windows were characteristic.
The Inca produced neither large-scale freestanding statues nor architectural sculpture. Metal figurines and small stone ceremonial bowls in the shape of llamas and alpacas are among the finest examples of their sculpture.
Inca pottery, like that of the Chimu, was mass-produced, but it was less distinguished. The most characteristic shape was that of the aryballos, a polychromed container for carrying liquids. In both textiles and metalwork, the Inca continued the Central Andean tradition of high-quality design and execution.