You will find important facts about Machu Picchu which are very useful. The citadel of Machu Picchu is situated at 2.360 meters above the sea level, located 130 kilometers northwest of Cusco, Urubamba province, at the crest of the hill Machu Picchu. Is 13 º 9 ’47 “south latitude and 72 º 32′ 44” west longitude. Is part of the district oh the same name, in the town you will find underground hot sulfur springs which bubble up from the rocky ground at varying temperatures. The especially-built pools at this resort are the basis of its use as hot mineral baths. The average temperature of the water runs from 38ºc to 46ºc. There are also changing rooms, bathrooms and a small snack bar.

Machu Picchu is considered a masterpiece of architecture and engineering. Its unique architectural features and landscape, and the veil of mystery that has woven around much of the literature published on the site, have made him one of the most popular tourist destinations on the planet.

Machu Picchu is in the List of World Heritage of UNESCO since 1983, as a whole cultural and ecologic part known under the name Historic Sanctuary of Machu Picchu. On July 7, 2007 Machu Picchu was declared as one of the new seven wonders of the modern world at a ceremony in Lisbon, Portugal, which was attended by a hundred million voters in the world.

All buildings in Machu Picchu are the classic Inca architectural style, buildings with walls of polished stones in a regular form, perfect joints between the stone blocks and a slight slope or incline. It has terraces, stairways and water fountains. In the whole area of Machu Picchu abundant ponds and water sources called “pacchas” carved in stone, interconnected by canals and drains drilled into the rock.

The ruins are inside an intangible territory of the National System of Protected Natural Areas (SINANPE), called the Historic Sanctuary of Machu Picchu, which covers an area of 32,592 hectares (80,535 acres or 325.92 km ²) basin river Vilcanota-Urubamba. The Historic Sanctuary protects a number of biological species in danger of extinction and several Incas establishments. The landscape is shaped by a series of hills and mountains, with almost vertical slopes and deep narrow ravines where rivers flow.

The weather is warm and humid during the day and cool at night. The temperature ranges between 12 and 24 degrees Celsius. The area is generally rainy, especially between November and March. The dry season from April to October brings on higher temperatures. This season is also preferred by travelers planning to visit Machu Picchu.

The Sanctuary of Machu Picchu is in the middle of woods and has few flat spots, so that had to be deforested for farming and terracing. According to recent studies, apart from corn, also coca was grown in the platforms surrounding the citadel. Similarly, could grow fruit and tubers of the types that still are planted in the area, including cassava and sweet potatoes. The Machu Picchu Park consists of various species of trees, ferns, grasses, mosses and scrub plants. Along with the pisonay and alder, the latter a large tree very popular throughout the Peruvian Andes, we can find several species of conifers and broadleaf trees that can reach several meters in height. Orchids occupy a special place, as are found throughout the Inca citadel.

Animals such as llamas and alpacas always were linked to the Incas, their presence there is no doubt because they had to cover the frequent transport of goods between Cuzco and Machu Picchu. Their bones have been found in graves of the place and there is evidence that it may be presumed that also were part of the diet of the population. Alongside these bones have also found the two other domestic Andean animals such as guinea pigs, and dog, obviously introduced by humans. Also there is the spectacled Andean Bear, Condor, different types of birds.

It is designed for travelers with adventurous spirit who looks for comfort and safety. Expedition service has remodeled his seat upholstery with Inca motifs, giving them a very local and indigenous touch and the convenience of having ample space for your backpacks.

* Vistadome
Is the quickest and easiest way to visit Machu Picchu. On the trip, you will enjoy delicious snacks and beverages both hot and cold. The Vistadome train is newly renovated, which are equipped with panoramic windows that allow you to enjoy a spectacular view and take wonderful pictures.

* Hiram Bingham
It has 2 has and 42 passenger spaces, a bar car and another car to kitchen for food preparation. Among many exquisite design details of the cars are large and comfortable seats and extra wide tables. Almost 3 feet long and 30 cm wider than others on the same route, these cars are among the most spacious and comfortable in the world.

Also there is another way to arrive to the Sanctuary, by the famous Inca Trail, which is a journey throughout the roads that were built by the Incas. Here you will have the opportunity to appreciate wonderful sceneries, micro climates, flora and fauna. There are ohters alternatives of treks like Salkantay, Lares and Choquequirao. 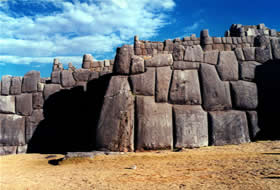