The Cusco music and the dance has its origins defined by the term taki, for the Incas, it was pentatonic and they created compositions that were religious, warrior, or profane. Dance, music and singing were present in all the community activities or rituals, which some of them are the following: Uaricsa Arahui or Inca dance, Llamaya or pastoral dance, Harahuayo or agricultural dance, puruc aya or funeral dance between others.

The Inca music development in the period of Tawantinsuyo. During this step the Inca civilization reaches its maximum consolidation as the largest pre-Hispanic state and largest organization in America
The Inca culture had a great variety of dances related to a particular type of music, in all human practice was represented, for example, if the music is running for agriculture, which sought to encourage the hard labor camp, also had other activities such as dances Livestock, war, marriage, funerals, rites of initiation, Fertility etc. Both Inca music and dance music as played an important role in the community.
The music had an obvious role in the development of the Hispanic cultures, and also with musical instruments was related to social stratification.

Also the Incas used a variety of instruments like: Pomatinyas (made of feather skin), guayllaquepas, (trumpets) the pinkullo (wind instrument similar to flute) the antaras, the Huancar, (large drum used by men). The Tinya (small drum used by women). In the case of drums, generally were made of camelid skin but there were some made with human skin of the enemies which were vanquished. Nowadays the people keep the tradition using some of these peculiar instruments.

Therefore musical instruments are the existing sample to recap the music of pre-Columbian peoples, and that based on its construction, aesthetics and sound we may have a vision of reality sound Hispanic, considering that until now we have some of such instruments as the dulcimer and flute for example.

The music was imaginative and expressive, there was to demonstrate the skills of the performers, their emotions or was just for fun. Unlike the music was the means of expressing their faith, their way of honoring ancestral deities, to represent their hopes and fears to them.

Nowadays we can refer to the existence of an Andean folk music full of character and life, thanks to the evolution of musical traditions from a range of influences pre-Inca, Inca, Spanish, African and even Amazon, as
each region developing musical traditions with their own characteristics, also present in their dances and instruments.

Can be recognized in the current Andean music two important features, the first deals with rural areas present in the music with a presence in the collective and ritual used in various religious activities or as
part of meditation or grazing. The second feature is an Andean music developed in urban areas, with more projection and broadcasting groups that have taken this music outside the continent, including groups like I can quote IntiIllimani, Markama, Los Kjarkas etc.

Another interesting thing to mention is that due to the decrease of Catholic proselytism, currently these Andean people have been returning to their ancestral customs, may merge its mystical worship with Catholic elements. For that reason at the moment of visit Cusco you will be able to appreciate in some Cusco restaurants folkloric shows and their joyful festivities. 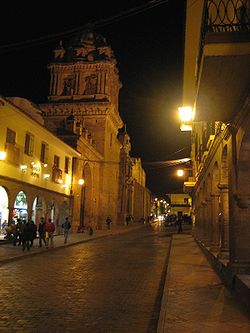