We have 2 daily shift , 9 am. or 2 pm.We will go to Sacsayhuaman located to the North of the city. There we Start the Riding, visiting the magnificent Q’enqo temple, Puca Pucara, and the temple of the water Tambomachay. We can also see a panoramic view of the city. then Return to Cusco.
Sacsayhuaman can be variously translated as ‘speckled falcon’ or ‘speckled head’. The last interpretation refers to the belief that the city of Cusco was set out in the form of a puma whose head was the hill of Sacsayhuaman. The origins are uncertain but the fortress is generally attributed to the period of Inca Pachacuti, the man who essentially founded the Inca empire.
Here is made the famous Inti Raymi or Festival of the Sun on June 24 of each year.
Just 200 meters from Sacsayhuaman is our next destination Q’enqo (Labyrinth or Zigzag) This is one of the finest examples of a rock artfully carved in situ showing complex patterns of steps, seats, geometric reliefs and a puma design. It was religious center dedicated to the worship of the Earth and, according to some theories, funerary rituals. Our next visit is Puca Pucara (Red Fort) was used as a center for military use and control, as well as a place where travelers may have lodged here with their goods and animals before entering or leaving Cusco.
Our last destination, is Tambomachay (Cavern Lodge) have played an important religious function linked to water and land regeneration. It is estimated that was built around 1500 AD. The site covers approximately one acre and the material used for its construction was limestone with polygonal style gear. It has the following sectors: industry sources at various levels with terraces at the base is a source of great size has two important channels ritual. 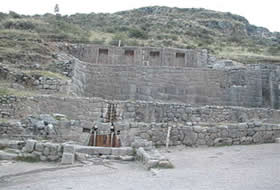 Recommendations
– Comfortable clothing to ride.
– Wind Breaker (Depending on the season).
– Sun block and sun glasses, Hat
– Bottle of water and Snacks
– Camera