ECONOMY IN THE INCA EMPIRE OF PERU

The main resources available to the Inca Empire were agricultural land and labor, mines (producing precious and prestigious metals such as gold, silver or copper), and fresh water, abundant everywhere except along the desert coast. With careful manipulation of these resources, the Incas managed to keep building a strong economy in their Empire.
Tribute in the form of service (mita) played a crucial role in maintaining the empire and pressurizing its subjects into ambitious building and irrigation projects. Some of these projects were so grand that they would have been impossible without the demanding whip of a totalitarian state. Although a certain degree of local barter was allowed, the state regulated the distribution of every important product.
The astonishing Inca highways were one key to this economic success. Some of the tracks were nearly 5 mi (8 km) wide and at the time of the Spanish Conquest the main Royal Highway ran some 3,100 mi (5000 km), from the Río Ancasmayo in Colombia down the backbone of the Andes to the coast at a point south of the present-day Santiago in Chile. The Incas never used the wheel, but gigantic llama caravans were a common sight tramping along the roads, each animal carrying up to 110 lb (50 kg) of cargo. 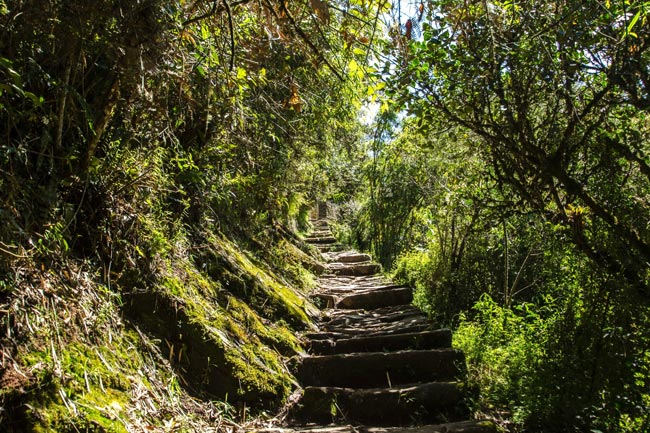 Stone steps along the Inca Trail to Machu Picchu, Peru.

Every corner of the Inca domain was easily accessible via branch roads, all designed or taken over and unified with one intention – to dominate and administer an enormous empire. Runners were posted at chasqui stations (chaski stations) and tambo rest-houses which punctuated the road at intervals of between 1 and 9 mi (2 and 15 km). Fresh fish was relayed on foot from the coast and messages were sent with runners from Quito to Cusco (1,240 mi/2,000 km) in less than six days. The more difficult mountain canyons were crossed on bridges suspended from cables braided out of jungle lianas (creeping vines) and high passes were – and still are – frequently reached by incredible stairways cut into solid rock cliffs.
The primary sector in the economy was inevitably agriculture and in this the Incas made two major advances: large terracing projects created the opportunity for agricultural specialists to experiment with new crops and methods of cultivation, and the transportation system allowed a revolution in distribution. 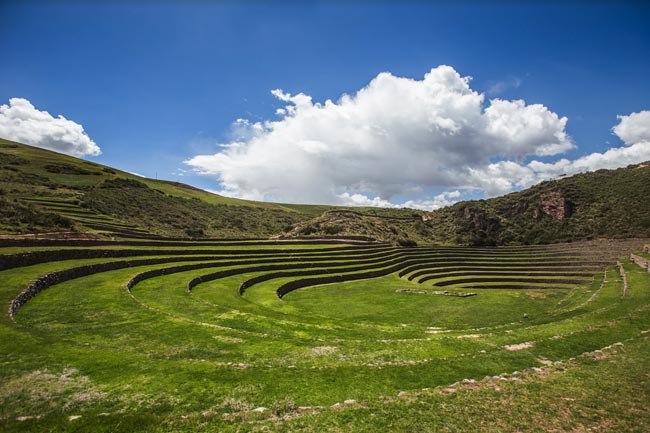 Massive agricultural terracing projects were going on continuously in Inca-dominated mountain regions. The best examples of these are in the Cusco area at Tipón, Moray, Ollantaytambo, Pisac and Cusichaca.
Beyond the aesthetic beauty of Inca stone terraces, they have distinct practical advantages. Stepping hillsides minimizes erosion from landslides, and using well-engineered stone channels gives complete control over irrigation. Natural springs emerging on the hillsides became the focus of an intricate network of canals and aqueducts extending over the surrounding slopes which had themselves been converted into elegant stone terraces. An extra incentive to the Inca mind must surely have been their reverence of water, one of the major earthly spirits. The Inca terraces are often so elaborately designed around springs that they seem to be worshipping as much as utilizing water.
Today, however, it is Inca construction which forms their lasting heritage: vast building projects masterminded by high-ranking nobles and architects, and supervised by expert masons with an almost limitless pool of peasant labour. Without paper, the architects resorted to imposing their imagination onto clay or stone, making miniature models of the more important constructions – good examples of these can be seen in Cusco museums. 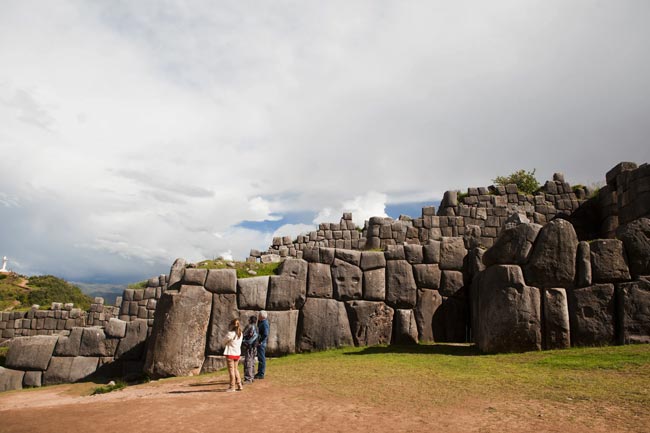 More importantly, Inca masonry survives throughout Peru, most spectacularly at the fortress of Sascayhuaman above Cusco, and on the coast in the Achirana aqueduct, which even today still brings water down to the Ica Valley from high up in the Andes. In the mountains, Inca stonework gave a permanence to edifices which would otherwise have needed constant renovation. The damp climate and mould quickly destroy anything but solid rock; Spanish and modern buildings have often collapsed around well-built Inca walls.
Continue reading about the Inca Empire: